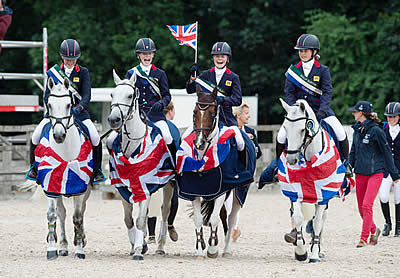 Germany claimed all gold in Dressage while Great Britain dominated Eventing and took the Jumping team title. However, the Swedish flag also flew high on the final day of the FEI European Pony Championships 2018 at Bishop Burton College in Yorkshire (GBR) when Ingemar Hammarstrom stood top of the individual Jumping podium.

The German Dressage whitewash began in the Team event in which Moritz Treffinger (Top Queen), Jana Lang (NK Cyril), Julia Barbian (Der Kleine Konig) and Lucie-Anouk Baumgurtel (Massimiliano FH) joined forces to post the winning score of 226.286. Denmark took silver on 219.028 and The Netherlands finished close behind in bronze on a final tally of 218.715.

Treffinger was outstanding all week, taking triple gold when also topping the Individual and Kur to Music competitions with his 10-year-old mare. And Denmark’s Alexander Yde Helgstrand was also highly impressive when claiming triple silver with his 12-year-old gelding Adriano B. Jana Lang claimed Individual bronze, but it was her German team-mate Barbian who stood on the third step of the podium in the Kur.

Treffinger looks to have real star potential, judges Jacques Van Daele, Yuri Romanov, Isobel Wessels, Elke Ebert, and Maja Stukelj all placing him first for a big total of 81.875% in the Kur which he performed to David Guetta music.

It was a story-book finish when Britain’s Saffron Osborne claimed Eventing Team and Individual gold with the extraordinary 13-year-old Little Indian Feather – a lucky pony who was given a second chance and never looked back.

In very poor condition when rescued from a pound as a two-year-old by the Hennessy family from Waterford in Ireland, the mare survived a near-fatal injury and then produced a surprise foal before beginning her Eventing career and eventually moving on across the Irish Sea. She took Team and Individual silver for Osborne at last summer’s Championships in Hungary, and this year the pair went one better when claiming double-gold.

In fifth place on a score of 28 after Dressage, they added nothing on cross-country day to move into the individual lead, and the 16-year-old daughter of trainer and former National Hunt jockey Jamie Osborne found herself with a fence in hand coming to the closing stages of yesterday’s final showjumping phase.

“I didn’t say to myself that I could have a fence down. I didn’t want to jinx anything and rode it like there was nothing in hand. I know that my pony’s a careful jumper but until you’ve gone over the finishing line you can’t be certain!” — Saffron Osborne (GBR)

The battle for the Jumping Team title was a thriller, with the hosts claiming gold ahead of Sweden and a fierce fight between France and Ireland for the bronze. Clare Whitaker, wife of Olympic legend John Whitaker and mother of Louise and Robert, who also compete at the very top end of the sport, was British Chef d’Equipe. “It meant a lot to win on home soil,” she said.

As other nations started to struggle during the second round the GB girls kept their cool. Shaunie Greig with Casino Royale and Claudia Moore riding Elando van de Roshoeve knew they had the gold medal in the bag after third rider Perdi Digby posted a clear with Kayleighs Star to leave them on eight faults. They had a nine-fault advantage over Sweden in silver, but the French and Irish were tied on 20 faults so all four riders from each team had to jump off once more for the bronze. And it went right to the wire, with France shaving a few precious seconds off the time to clinch it.

Although the gold was won, fourth British team member Nicole Lockhead Anderson still rode her final round with Gangham Style – yet another clear – to keep her very much in the running for the individual medals, but it was Moore who came off best for the home side on the final day. The winner was undisputed as 15-year-old Ingemar Hammarstrom and his bay gelding Ocean des As were just too good for the rest when not touching a pole all week to take the title for Sweden.

With just four faults on the board, Ireland’s Max Wachman and Cuffesgrange Cavalidam earned the silver but it took a two-way showdown with the French partnership of Romane Orhant and Quabar des Monceaux before Moore claimed the bronze with the quickest time in a third-round jump-off.