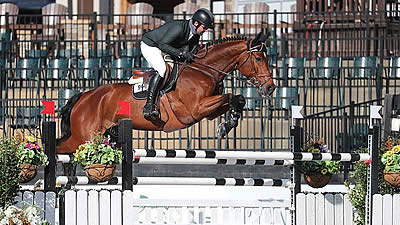 Sangris Boy’s long strides were a challenge in the first round, Gallagher said of the course designed by Guilherme Jorge (BRA), but came in handy in the jump-off. Out of 54 combinations, the duo delivered a strong win against nine jump-off competitors.

“My horse has a really big stride, so in the first round, a lot of the lines were quite short for me when they were normal for others. I was a little worried about the time allowed, but we turned tight and made it as efficient as we could. My horse jumped really well today so that made my life a lot easier! I knew there were a lot of fast people in the jump-off. The course had long gaps between each jump so I knew I could use the stride to my advantage. There were two rollbacks that I tried to be very tight and forward with,” explained Gallagher.

Iwasaki’s relationship with both mounts is relatively new, so she was pleased with her performance on each one. After only a month of training together, Attendu de Lannois Z, the 2013 Warmblood gelding (Unknown x Unknown) owned by Ashland Farms, proved to be a winning partner.

“This is his second Derby, and last week was his first. Last week, we were tenth,” explained Iwasaki. “He was really great in both rounds, we just had to get the Handy a little bit smoother. His transitions are so great, so when I did a tight rollback to the trot jump, we ended up walking. [Today], I just had to make sure to keep my leg on and get everything evened out.”