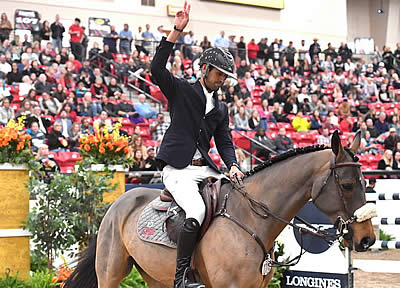 Nassar, 27, and his 14-year-old Hanoverian gelding were fastest in a six-horse jump-off set by Anthony D’Ambrosio (USA). The pair used their natural foot speed and tidiness to their advantage, coming through the timers in 34.57 seconds, over a second fastest than their closest competitors. It was an international podium, with Wilhelm Genn (GER) and Bugatti earning runner-up honors (35.73 seconds) and Harley Brown (AUS) and Mylord Cornet finishing third (40.34 seconds).

“It was a fast jump-off,” Nassar said. “Wilhelm set a really tough time to beat, and he was really efficient everywhere on a horse that has a bigger stride than mine. I just knew I had to be nice and neat in the turns and not go too crazy down the long lines.”

“It was a fast jump-off… Wilhelm set a really tough time to beat… I just knew I had to be nice and neat in the turns and not go too crazy down the long lines.” — Nayel Nassar (Egypt)

The top three were the only combinations to turn in double-clear rounds on the evening. Brown was the first to navigate the jump-off without fault, but he was forced to take a more conservative route with his less experienced 8-year-old. Genn, who won Sacramento’s (USA) World Cup qualifier in October, jumped ahead by nearly four seconds with an outstanding right turn to the jump-off’s second fence and a bold gallop down to the final obstacle. As the last to go, Nassar knew exactly what he had to do to win his second straight World Cup qualifier, and he executed, despite having a precarious rub two fences from home.

“I had the luck of the draw a little bit. I had the pole position coming in,” Nassar said. “It always helps when you know what you need to do, and I relish the pressure as well. Lordan can feel that, too; I was getting tingly walking in [the ring], and he really tried his heart out.”

Richard Spooner (USA) may have been kept off the podium, but he took over the lead in the west coast sub league standings of the Longines FEI Jumping World Cup™ North American League with his fourth-place finish aboard Quirado RC. He now boasts 49 points, one ahead of Eve Jobs (USA). Nassar moved up to third in the standings; he now boasts 46 points.

“[Quirado RC] is just knocking my socks off,” Spooner said. “He’s been unbelievable in the World Cup season. He’s a huge horse — he’s about 18.1, maybe 18.2 hands — but he somehow is still very elastic with his body. I just feel graced every time I get to ride him, because the power that you feel with that horse is absolutely awesome.”

“Bugatti is 12, and every year when I take him to a new level, and I think it is about as big as he can jump, he surprises me and makes it work,” Genn said. “Who knows what the future brings? I’m super proud of him.”

After a brief holiday, the North American League resumes in Guadalajara (MEX) on 26 January 2019.