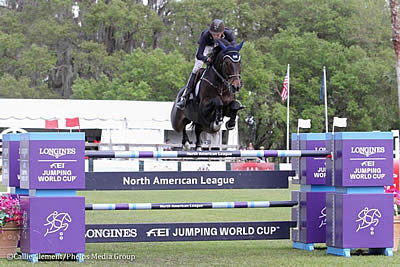 Wellington, Fla. – March 15, 2019 – Horse & Country TV (H&C TV) is pleased to offer an exciting lineup of show jumping programs this weekend on its award-winning network as well as on demand. Starting on Saturday, March 16, at 9 p.m. EST, H&C TV will showcase highlights from the final leg in the East Coast division of the 2018/2019 Longines FEI Jumping World Cup™ North American League at Live Oak International in Ocala, Florida.

“I had such low expectations because I did so well [on Friday in the qualifier],” said Moggre. “I thought it couldn’t really get better than that. It really did get better though.”

Moggre, who is in his first year of eligibility for World Cup qualifying points, and the 10-year-old Westphalian gelding bested 38 top-ranked show jumping combinations, and six in the jump-off, to claim the win with a double-clear effort in 41.29 seconds. At such a young age, Moggre has a very promising future in the sport, as he demonstrated with his consistent results at the 2019 Live Oak International.

Sunday’s Rolex Grand Prix CSI5* is part of the Rolex Grand Slam of Show Jumping – the toughest series in show jumping offering one of the biggest prizes in the sport with a €1 million bonus going to any athlete who can consecutively win three grand prix events at the Dutch Masters, Aachen, Spruce Meadows, and CHI Geneva. If that same athlete then wins a fourth major in succession, they win an additional €1 million bonus prize.

Great Britain’s Scott Brash is the only athlete in history to have achieved such a feat in 2015 riding Hello Sanctos.

Watch the Rolex Grand Prix CSI5* at the Dutch Masters LIVE on H&C TV on Sunday at 10:25 a.m. EST! If you miss the live broadcast, H&C TV will also be replaying the entire competition as-live on Wednesday, March 20, at 8 p.m. EST as well as a highlights show of the event on Friday, March 22, at 9 p.m. EST.