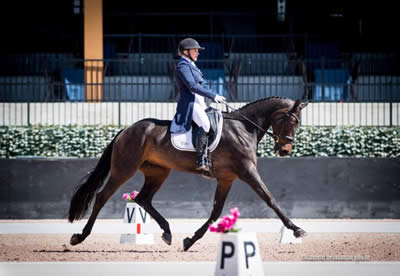 Tryon, NC USA – April 5, 2018 – Marilyn Little (USA) and RF Scandalous sit atop the leaderboard in the FEI CIC 3* division at The Fork at Tryon International Equestrian Center (TIEC), receiving 24.2 penalties on the first day of dressage competition during the FEI World Equestrian Games™ Tryon 2018 (WEG) Eventing Test Event. Phillip Dutton (USA) and I’m Sew Ready currently hold second with a 26.4, while Jordan Linstedt (USA) and Revitavet Capato round out the top three on a 26.7.

For the second year in a row, Little and the 2005 Oldenburg mare (Carry Gold x Lario) claimed the top spot during the first day of dressage at The Fork, as they strive to maintain their winning record at the event since its relocation to TIEC last year, as they head into their second phase on Saturday. While their position is the same now as it was last year, Little acknowledged that her partner is a much different horse.

“I think RF Scandalous is much more mature than she was a year ago. She went in there today and had some of the best canter work she’s ever done. I was really pleased with her changes. She was perfect. She’s a dream!”

After a graceful start for the duo this spring, Little hopes to go at a more consistent pace throughout the month, keeping “Kitty” active and her fitness level intact as The Land Rover Kentucky Three-Day Event approaches later this month. “This is her final competitive run before Kentucky,” said Little. “I was really thrilled with her today, given that she is incredibly fit right now. My plan was to get her as fit as I could by this time, and then be able to back off a little bit in April and fine tune some things, so she’s coming into this event right where I’d like her to be.”

Thirty-six horse-and-rider combinations will contest the track on Saturday, designed by Course Designer Captain Mark Phillips, who is also responsible for course design at the WEG later this year. Little will strategically map her intentions for her run after she walks the course and confirms a plan for the pair.

“Last year we had a mixed bag of success,” she continued. “The Fork was wonderful for us; that was a great event. I came back in the fall for AECs and that didn’t go so well for me, so there are some things that I would like to accomplish out there.”

Little also plans to use The Fork to prepare the mare, owned by Jacqueline Mars, Robin Parsky, and Michael Manders, for possible WEG contention. “I think it’s a very important prep event for a lot of reasons,” she explained.

“The management and the staff are really allowing the riders to train for WEG here. Not only do we get to keep an eye on things and see where things are going, but everyone has been very sensitive to the horses and the fact that the next time they come in this ring, it will be for that. You saw that today in the amount of time they gave us around the arena before we started the test. I thought that was very kind, and I thought the horses were able to truly settle.”

Eventers from across North America arrived to test the waters at the venue this week, many taking their turn in the George H. Morris Arena on Thursday in anticipation of the prestigious events to come. “Of course, if there are people that couldn’t get here, there are plenty of opportunities to come to the other shows during the summer and I’m sure that we’ll see people taking advantage of that because it’s such a fantastic opportunity for us to have that chance,” concluded Little.

Later in the afternoon, Lynn Symansky of Middleburg, VA and Under Suspection posted the lead in the Advanced-A division with a score of 25.70, while Symansky reigned supreme once more on Donner, claiming the second place position with 28.20 penalties. Boyd Martin of Cochranville, PA and Kyra rounded out the top three on a 28.90.

Will Coleman of The Plains, VA and Obos O’Reilly currently sit in first place in the Advanced-B division on a 24.50, while Lauren Kieffer of Middleburg, VA and Veronica earned a 26.10 to stand in second. Leslie Law of Ocala, FL and The Apprentice follow in third with a score of 27.00.