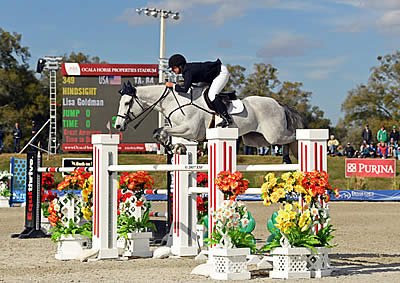 Ocala, FL (January 30, 2017): Elite competition resumed in the Ocala Horse Properties Stadium on Sunday with the $50,000 Equioxx Grand Prix. Thirty-seven riders turned out for the grand finale of Week II, and everyone had their eyes on the prize.

Oscar Soberon from Monterrey, Mexico designed a challenging course for Sunday’s crop of riders, comprised of 16 jumping efforts. Nine would advance from the first round to the jump-off where only two would go clear in contingency for the win.

Lisa Goldman of Hawthorn Woods, Illinois garnered the blue-ribbon victory aboard Hindsight, marking the horse’s first Grand Prix win. They entered as the first competitors the jump-off and laid down a solid round that would stand the test of the entire class — not an easy feat for a class of this caliber.

“The course was big and technical,” said Goldman. “There are a lot of very good horses and riders here, so I thought [Oscar] designed the course well. The time allowed was tight but the course was the right amount of challenging for the riders here.”

They clocked in fault-free in 44.120 for the eventual win. Eight more followed Goldman, but none could match her speed.

Venezuelan rider Emanuel Andrade immediately followed Goldman in the order, but an unfortunate rail at the B element of the combination would settle them with the eventual fifth-place prize.

The only other clear round of the jump-off would be Manuel Torres of Colombia, riding Christofolini H, owned by Andrea Torres Guerreiro. With many top five finishes and wins at HITS Ocala, as well as several classes competing against Goldman, Torres knew what he had to do to compete — be quick, be clean and shave the time off the clock.

They zoomed through the course as the clock ticked and the crowd cheered.  They powered toward the finish, passing the timers clear with a time of 44.242, just one tenth behind Goldman’s time for the ultimate second place.

Eliza Lehrman of Mechanicsburg, Pennsylvania took home third place riding Fenom Van Klapscheut, owned by Five Way Farm, LLC. As the final pair in the jump-off, they nearly turned in a clear round, but their time of 51.164 gave them two time penalties.

Tracy Fenney and MTM Reve Du Paradis, owned by MTM Farm, have been on fire at this year’s Ocala Winter Circuit. They returned to Sunday’s class after winning the $25,000 SmartPak Grand Prix on Thursday with another winning goal to set.  Unfortunately. a rail at the second-to-last fence kept them from topping Goldman on the leaderboard, but their speedy time of 43.006 earned them fourth place with the quickest round with four faults.