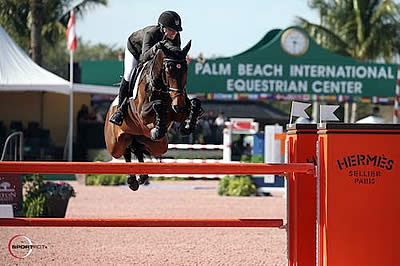 Course designer Alan Wade (IRL) saw 18 clear rounds out of 47 entries to contest his 1.45m speed track, and the times got faster and faster until the very end.

Shane Sweetnam (IRL) and Spy Coast Farm’s Cyklon 1083 raced in at 60.50 seconds for a brief lead, but eventually finished fourth. Ali Wolff (USA) and John C. Wolff’s Caya stole the lead in 60.34 seconds, but settled for second in the end. Eduardo Menezes (BRA) came close to the time, but placed third with his round in 60.40 seconds riding E2 Stables’ Caruschka 2. With three left to go, Keenan and Chansonette Farm’s Be Gentle raced to the win in 59.83 seconds.

“That was really exciting!” Keenan stated. “That horse gives you a great feeling because pretty much any class you enter, you have a shot at winning as long as you stay out of her way. I think there are very few horses that you can say that about.”

Keenan had the advantage of jumping the track first on her horse Super Sox, and then going at the end with ‘Jenny,’ an 11-year-old Dutch Warmblood mare (Ticallux Verte x Gentleman).

“After I jumped my first horse, the one that I really wanted to watch to get a sense of what the winning track would need to be was Shane Sweetnam,” Keenan detailed. “I think everyone would agree that he is a master of these classes, especially on Cyklon. I watched him go, and I thought that I would be happy if I was second to that. Then they started going faster and faster.

“The great thing about Jenny is that we walked a plan, and I knew what I had to do. She lets you make decisions in advance because she is so dependable,” Keenan continued. “I was able to do a lot of the leave-outs. Where she makes up so much time is in the turns. I count the strides between the jumps that are on the corners. I think that is what made the difference, but the class got really fast at the end.”

The 20-year-old rider is in school at Harvard University and splits her time between Boston and Wellington each week. The busy schedule is a bit different from most professionals, but trainer Cian O’Connor and his team at Karlswood Stables keep Keenan’s horses ready to go.

“It is fun to be able to participate in classes like that and actually have a shot,” she noted. “Unlike most professionals, I go to school for half the week. I don’t sit on a horse, and then I show up on Thursday morning and try to jump the main class that day. When I first started the circuit, it was a little bit of a reality check. I am much shorter on experience than a lot of the riders in these classes, and I am tough on myself about that, but at the same time I have to be realistic.

“It is amazing to have a horse like Jenny that knows her job,” Keenan added. “She is funny because at home on the flat, or in the schooling area, she does not want to do traditional work. She does not need to be drilled on anything; she just wants to go her own way. When you watch her walk into the ring, I just have her on a loose rein, and then as soon as she hears the buzzer, she knows. As soon as you pick up a canter and point her at a jump, it is like she zeroes in. She is an amazing horse.”

Also competing in the International Arena on Friday, the $35,000 Illustrated Properties 1.45m CSI 2* class saw 62 entries and 18 qualified for the jump-off. Sixteen entries continued on for the tiebreaker, where eight jumped double clear.

Earlier in the day, Spain’s Sergio Alvarez Moya earned his second win of the week, topping the $6,000 1.40m Speed Challenge riding Iron Man 111. The $2,500 Engel & Völkers High Amateur-Owner Jumper Power and Speed concluded the day with a win for Olivia Chowdry and Cosma 20.

Sixty-five riders vied for the $5,000 USHJA Pony Hunter Derby title, but it was Fuqua who rode Somekindawonderful, an entry owned by Iwasaki & Reilly, to win the blue ribbon. The pair earned the high score in the first round, an 89, and an 81 in the second round for a total score of 171.

“It was really fun,” said Fuqua. “I love the grass and all the jumps. I’ve been riding Somekindawonderful for about a year. We call him Ronald. He’s really sweet and loves to cuddle.”

In addition to riding the 16-year-old New Forest Pony by Justice H.R., Fuqua rode three other ponies in the class on Saturday and finished inside the top 15 with each of them. Fuqua trains with Elizabeth Reilly of Makoto Farms and competes in the Pony Hunter and Equitation 11 & Under divisions.

“In the handy round on my other pony I went off course, so I really had to focus on the course,” Fuqua explained. “The last thing Liz [Reilly] said to me before going in the ring was to ‘keep going forward.’ I am really thankful for Liz. Since I started training with her, I have improved a lot.”

Libbie Gordon of Statesville, NC earned the second place ribbon. Gordon piloted Elle Gibbs’ Astro Boy to scores of 85 and 83 in the first and second rounds, respectively, for an overall score of 168.

Speaking of the 2006 medium Welsh Pony, Gordon said, “He just has the best personality around the barn, as well as when you’re on him. He’s a lot of fun to jump, and he jumps really well. It was exciting to ride on the grass field.”

Gordon also rode several other ponies in the class.

“My first two rides didn’t go as planned,” she continued. “It is a really spooky venue, so I got on Max [Astro Boy] with the mentality of whatever comes, comes. It ended up going really well so I’m happy!”

The third place ribbon went to Augusta Iwasaki of Calabasas, CA and Caleche, owned by Laura Barrett-Gurtis. Iwasaki guided the 2006 large pony mare by Constantin to a first round score of 81 and a second round score of 86, earning a total score of 167.

Jensen rode So Enchanted, an entry owned by Rendezvous Farm, to win the $1,000 Small Pony Hunter Classic, sponsored by Visse Wedell and Douglas Elliman. The pair was sitting in third place after the first round with a score of 83, but consistency was key and a second round score of 84 for an overall total of 167 was enough to warrant the blue ribbon.

After dutifully helping untack the 2008 Welsh Pony Cross mare by Maple Side Mr. Magic, Jensen explained why he enjoyed showing on the grass field.

“I love being able to get away from a regular show ring,” he said. “I got to gallop, and my rounds were very consistent and smooth. I love being able to really gallop up to the jumps and have her jump so well. She really paid attention in the grass field, which I liked. She’s really sassy, but the thing I like most about her is her canter.”

Clara Propp of New York, NY earned both the second and third place ribbons. Propp and her second place mount, Everyday Enzo, owned by Olivia Golden, LLC, received a score of 82 in both rounds for a combined score of 164. Everyday Enzo is a 17-year-old Welsh Pony that Propp started riding at the end of 2016. A total score of 161 for Propp and Quicksilver Butterfly was enough for third place. The 2005 Welsh Pony mare by Mortons Best Man is owned by Aquitaine Equine.

Week nine of the 2017 Winter Equestrian Festival continues on Saturday featuring the $380,000 Douglas Elliman Grand Prix CSI 5*, presented by The Bainbridge Companies, in the International Arena during the evening. The $10,000 USHJA National Hunter Derby will decide a winner on the Derby Field at Equestrian Village (AGDF show grounds). For full results, please visit www.PBIEC.com.