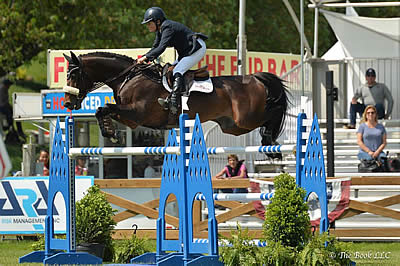 In 1983, Howard rode to her first grand prix victory at Old Salem Farm aboard Albany, the horse that later carried her to win a team gold medal at the 1984 Olympic Games in Los Angeles. On Sunday, she returned to familiar territory and claimed another milestone win on the Old Salem Farm Grand Prix Field. From a starting order that included 30 horses, Howard, 62, was the first of only three to jump clear over a challenging track set by Ken Krome (USA).

Again leading the charge in the jump-off, Howard and Quadam, owned by Laure Sudreau, set the pace with another clear round in 42.45 seconds. The time was more than enough to top runner-up Katie Dinan (USA), who guided Brego R’N B to a double-clear day in 42.45 seconds.

Howard welcomed Quadam, a 13-year-old Hanoverian stallion (Quite Easy x Stakkato), into her string when she found him for her client Richard Neal in 2014. Two years into that partnership, they decided to sell the mount and Sudreau stepped up to make the purchase as a grand prix ride for Howard.

“He almost won the American Gold Cup here last year with one down in the jump-off, but today’s course suited him because he is very well balanced,” said Howard. “The horses that are a little long in the body and not as active behind had a hard time because there were a lot of tight turns. My horse’s hind end is always underneath him, he turns well, and he’s easy to ride because his stride is so expandable. Jump-offs like today’s are so much easier for him because when you slow down you don’t lose any energy.”