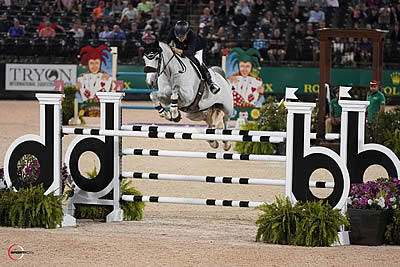 Mill Spring, NC – May 5, 2018 – An electric atmosphere came to a hush at Tryon International Equestrian Center (TIEC) on Saturday night, as Leslie Burr-Howard (USA) and Donna Speciale took to Tryon Stadium as the final combination in the jump-off round of the $70,000 Tryon Resort Grand Prix CSI 2*. The duo leapt to a fast, first place finish to revive the highly anticipated “Saturday Night Lights” competition and mark the first FEI show jumping victory of the 2018 season.

A total of 45 combinations took to the arena to contest the Richard Jeffery (GBR) designed course, with only eight returning to take their turn around the fast track. The field saw a battle until the very end, with Howard and the 2008 Dutch Warmblood mare (Cavalier x Concorde) claiming the blue ribbon after securing the fastest time as the last pair on course for the evening, stopping the timers in 42.167 seconds.

“I thought Richard [Jeffery] did a great job,” Howard explained of the night’s track. “It’s a sign of a good course when you have somewhere between six to eight clean. It’s a nice number. I think he did a great job because he had a bit of a mixed bag of horses. There were some young horses, some older horses, some young riders and I think he did well to get the eight clean that he did.”

Howard and the mare, owned by Laure Sudreau-Rippe and Peter Howard, rode to the top of the leaderboard just two-tenths of a second ahead of O’Shea, who was then knocked into second place. Despite the speed, Howard noted that she didn’t necessarily have one particular spot in the jump-off that shaved off time and credited the mare for her overall quickness.

“She is a very fast horse across the ground,” Howard said. “If you counted strides everywhere, I probably did more strides than the ones that were second and third, but she is such a quick horse that I knew I could have the luxury of not feeling like I had to leave out a stride in every line.”

The duo just returned from a light yet successful winter show season in Wellington, Florida, where they were the victors during the eleventh week of the 2018 Winter Equestrian Festival. Howard, who still considers the mare a less experienced competitor, intends to ask for more from the talented young mount as the summer progresses.

“I showed her very sparingly in Florida because I’m breaking her into the 1.60m level. I didn’t do a lot with her because I consider her to still be young. She’s ultra-careful, ultra-fast. We have a lot coming up in the summer, so I went for an easy Florida with good results before coming here. We will go to Lexington next week, then a month off, then off to Calgary.”

Howard concluded by complimenting the facility at TIEC and the atmosphere as a whole. She commented, “They’re doing an amazing job with the facility. I have to say tonight the footing was lovely. They’ve done a great job. It’s a great atmosphere here and they’re turning this into a world-class venue very quickly, probably faster than they thought they would be!”