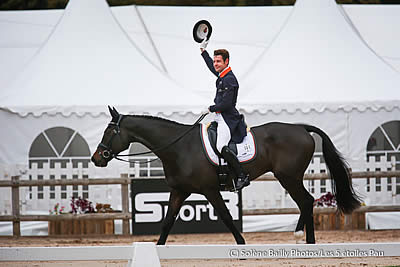 The World’s top riders and their mounts are all at the Domaine de Sers in Pau, Southwest France until this Sunday to battle it out in the CCI5*-L, the highest level eventing competition in equestrian sports. The competition began with the dressage test. In the first part of the test, Australia and Great Britain started as they mean to go on, taking the first eleven places in the provisional ranking ahead of the best French riders, currently twelfth and thirteenth.

With three of its representatives in the top 10, Australia dominates the leaderboard after Christopher Burton’s flawless performance (22 pts). Neck-and-neck with World number 3, British rider Piggy March (22.2 pts) ranked fourth in World, takes second place in the provisional ranking. No less than seven of her compatriots are in the top eleven, including Rosalind Canter (24.8 pts), currently on the third step of the podium.

Among the French riders, Jean-Lou Bigot (29.9 pts) and Arnaud Boiteau (30.1 pts) are twelfth and thirteenth, respectively.

The programme, times, results, and start lists are available on the “Les 5 étoiles de Pau” mobile App or on the website for the event: www.event-pau.fr.