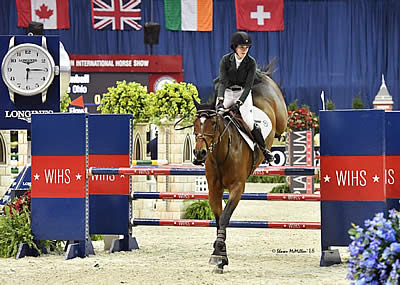 Washington D.C. – Household names in the show jumping industry will come together with tomorrow’s talent at the Washington International Horse Show (WIHS), presented by MARS EQUESTRIANTM, running from October 22 through 27, 2019 at Capital One Arena in the U.S. capital city of Washington, D.C.

Marking the culmination of a year’s worth of qualifying, hunter, jumper, and equitation riders will take center stage in the heart of the U.S. capital to chase WIHS glory. Sitting at the top of the qualified list, Sam Walker leads the charge for the Lindsay Maxwell Charitable Fund WIHS Equitation Finals, and top hunter riders including Scott Stewart, Liza Boyd, and John French will also make their way to Washington. The U.S. rider list is stacked with the likes of Olympians Kent Farrington, Laura Kraut, and McLain Ward turning up for international competition.

Opening WIHS, High Performance Hunters and the $10,000 WIHS Adult Hunter Championships highlight Tuesday’s Hunt Night evening, while the $10,000 WIHS Adult Jumper Championships take center stage on Wednesday evening. Special action kicks off on Thursday night, October 24, which is also Barn Night, with highlights that include the $50,000 International Jumper Welcome Class and one of the most popular classes, the $36,000 International Jumper Accumulator Costume Class.

Friday night, October 25, is Military Night presented by Caterpillar, Inc., and celebrates the athleticism of the horse. The night starts with the $50,000 International Jumper Speed Final, where it’s all about the fastest time, before the $25,000 Land Rover International Jumper Puissance tests just how high the horses can jump. Aaron Vale (USA) will look to win his fourth consecutive high-jump title, while all riders will have in mind to chase the indoor puissance record of 7 feet, 7 ½ inches, set by Anthony d’Ambrosio and Sweet ‘N Low at WIHS in 1983.

In addition, US Equestrian Chef d’Équipe Robert Ridland will be inducted into the WIHS Hall of Fame on Saturday night at WIHS. Ridland is a popular show manager and course designer, and has dedicated decades worth of time to the promotion of American horse sport.

WIHS concludes on Sunday, October 27, with the smallest and cutest stars of the show. Pony riders and their pint-sized mounts will compete for top honors in the WIHS pony hunter ranks, the WIHS Pony Equitation Finals, presented by Huntland, in addition to highlighting special local qualifiers for the WIHS Regional Championships.