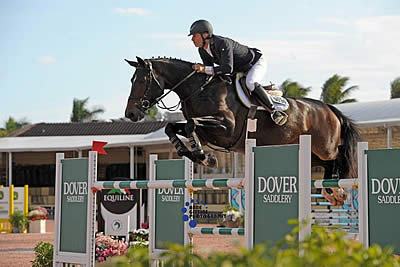 Only six pairs moved forward to contest the jump-off of 24 original entries and Lecuona remained on top in the course set by Hector Loyola of Wellington, FL. “It was a really nice course. It was very well built. There were difficulties all over, which was nice because they weren’t just in one place. I think that makes it better for us and the horses. We get challenged all over the course,” Lecuona remarked.

“My horse was amazing. It’s been a difficult year for us. I had to stop showing her because we went to Mexico for my wife. She’s a dressage rider, so we went to Mexico for the summer. This was [Noche De Ronda]’s first weekend back and she was amazing. She’s an incredible horse. I’ve had her since she was four and now she’s nine. I think she’s ready to step up to the international classes.”

Regarding his future plans with Noche De Ronda, Lecuona stated, “I want to do some pre-season shows and then some Grand Prix classes. I also want to try do some FEI classes and aim for the trial of the Pan-Am Games. I really think she’s a horse who can compete at that level,” he concluded.