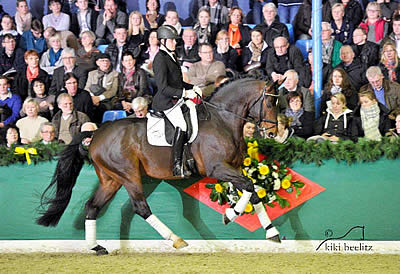 Beltano at the stallion show in Vechta. Photos by Kiki Beelitz.

Doug and Louise Leatherdale own both the five-year-old youngster Beltano by Belissimo M/Hohenstein and Hampton by His Highness/Rotspon. Under their trainer and rider Steffen Frahm, the two stallions showed great potential and received countless compliments from an expert audience at a sold-out house.

Beltano continues to show a great deal of promise and progress since starting his training under saddle. He is incredibly rideable, proven by two-time scores of 10.0 by the test riders at his 30-day test in Schlieckau. Willing and eager to learn, he is a stallion sure to be seen at the 2014 Young Horse Championships.

Hampton, offspring of His Highness, the 2002 Hanoverian Licensing Champion who tragically passed away in 2007, proved to be very grown up. Presenting himself to a large audience at the renowned auction house in Vechta wasn’t a problem for this impressive black stallion.

After many successes up to Intermediaire I and participation in the Nürnberger Burgpokal finals, Hampton and Steffen Frahm are making their way to the top of the sport of dressage. This year’s goal will be to move up to Grand Prix. In addition to his dressage performance abilities, Hampton has a lot to offer breeders. He received a score of 155 points in the estimated breeding evaluation by the FN, placing him in the top one percent of German dressage sires.

“We are looking forward to the new season,” said Jens Meyer, director of the breeding station in Dorum. “Our stallions make lovely foals and they are absolutely fit for sporting activity.”

As they celebrate the beginning of the new breeding season, quality, soundness and real training is the approach of the Hengststation Jens Meyer, Dorum.