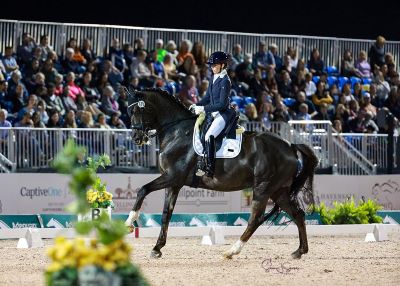 Vanommeslaghe rode Edison to their first-ever CDI victory and a career best of 79.115%, just edging out the winners of the qualifying Grand Prix, Frederic Wandres (GER) and Bluetooth OLD, who were second with 79.045%. Third-placed Benjamin Ebeling — last to go of the 10 riders — clinched third riding Illuster Van De Kampert to 77.370% for the USA.

After the pandemic-induced drought of shows, the spectators were keen to show their support, and almost immediately after Vanommeslaghe began her test, whoops rang out, and the crowd clapped along to her bold heavy metal-themed soundtrack.

“I was so delighted,” beamed Vanommeslaghe. “I was very tense because there was a lot of public for me, and it was our first international show in a long time. I could really feel the support of the crowd. My tension went away when I could hear them. I think the horse likes the music — and the public — he really likes to move in rhythm with the music.”

Judge at C Jane Weatherwax, who awarded over 80%, said: “Music that powerful could be a bit much for the horse, but your horse is so powerful, and it really worked — especially the music for the passage. It was very fun. There was interesting choreography in the class. I think most of the riders chose their degree of difficult wisely and were able to pull it off.”

Second-placed Wandres said of Bluetooth OLD: “I had a very good feeling during the test. For me that’s very important, because I had some shows when I started with him where he was a little bit shy, and I could not take what he offered me in the warmup into the ring. So that is already much better, and we find more and more together.”

Wandres is another rider on the hunt for a start at the Championships in Herning, and third-placed Ebeling is also eyeing a spot there. Both riders plan to contest the five-star show at AGDF 7.

“It was such a big environment in there tonight,” said Ebeling. “There was a little bit of tension from my horse. The show organizers do such a great job of advertising the show, so of course there was a big audience, and he got a little excited. We had some mistakes related to tension, but overall, I was very pleased.”

Charlotte Jorst (USA) chalked up her second win in as many days on the 19-year-old Kastel’s Nintendo in the World Cup™ Grand Prix Freestyle, presented by Wellington Equestrian Realty. Dancing to a soundtrack from “Pirates of the Caribbean” — complete with pirate motif on both her stock and the horse’s ear bonnet — Jorst laid down 79.075% to edge out Spain’s Juan Matute Guimón, who was second with 78.050% on Quantico. Anna Buffini (USA) finished third with 77.605% on FRH Davinia La Douce.

Two judges awarded Jorst over 80%, and she was delighted with Nintendo’s improvements from the last time they rode this test, in Aachen, Germany last September.

At 19, Nintendo was the oldest horse in the class, but thanks to his routine of ample trail riding and daily turnout, he is still fit and fresh in the ring.