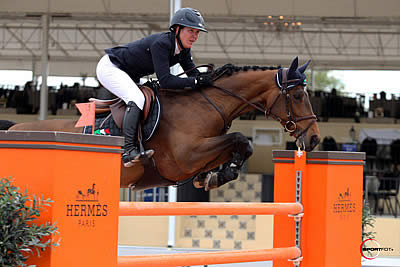 Saturday night’s 1.50m final will be held at 7 p.m., not 8 p.m. as previously stated, due to entries. The 2013 FTI Consulting Winter Equestrian Festival features 12 weeks of competition running from January 9 – March 31, 2013, and will be awarding almost $7 million in prize money throughout the circuit.

Richard Jeffery of Bournemouth, England, is the course designer in the International Arena at the Palm Beach International Equestrian Center for week eleven. In Wednesday’s $33,000 Spy Coast Farm 1.45m, 37 entries contested Jeffery’s speed track with 14 clear rounds. Lauren Hough and The Ohlala Group’s Ohlala were the winners in 61.88 seconds. Just behind, Shane Sweetnam and Sweet Oak and Spy Coast Farm’s Solerina finished second in 61.91 seconds. Eric Lamaze and Wang Chung M2S, owned by Morningside Stud and Torrey Pines Stable, finished third in 61.94 seconds. McLain Ward and Zhum CW, owned by Ilan Ferder and Missy Clark, were right there in fourth with their time of 61.97 seconds.

“She is obviously naturally very fast,” Hough said of the winning Ohlala, a ten-year-old Swedish Warmblood mare by Orlando x Cardento. “Leaving strides out isn’t normally the way I win; she is just quick across the ground. I made a few last minute adjustments. I wouldn’t say I gave her the best ride today, but she certainly helped me out. She doesn’t like to hit the fences and she enjoys winning, so she makes my job pretty easy.”

“I thought it was a good course today,” Hough stated. “There were a few good turns and I thought he did a nice job. It was a solid 1.45m.”

Commenting on her round, Hough explained, “I really have to stick with my plan. You don’t really end up doing the same number of strides as everybody else, but I did see Eric go. The top three or four were all very close, so I think it was just my lucky day.”

“She is good at everything to be honest,” Hough praised. “She is good indoors; she is good outdoors. I wouldn’t say that there is a particular track that suits her best. She just likes to win.”

Week eleven of the FTI WEF will continue on Thursday with the $50,000 Ruby et Violette WEF Challenge Cup Round 11 in the International Arena at 1 p.m. For full results, please visit www.showgroundslive.com.