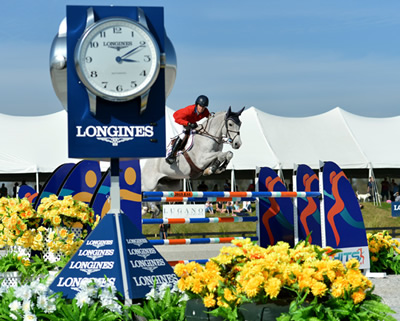 Ocala, Florida (February 15, 2015): Five days of FEI jumping classes boasting over $400,000 in prize money came to a close today at HITS Ocala CSIO4*, but not without a nail-biting finish in the $150,000 FEI Ocala Grand Prix. Laura Kraut of Wellington, Florida, aboard Cedric, owned by Cherry Knoll Farm, cruised through the jump-off besting six to take home the blue ribbon and this week’s largest individual purse.

Featuring 15 efforts set at an impressive 1.60m, a field of 40 took on the course designed by Martin Otto of Muenster, Germany. The first seven to go left the ring with faults until Juan Pablo Bentacourt of Colombia, aboard Troya Retiro, co-owned with Daniela Grana, took center stage. It was smooth sailing for the pair who finished with the first clean round of the day.

Bentacourt remained uncontested throughout the first half of the order but that changed when Mexican FEI Nations Cup™ rider Sofia Larrea and Aplicatia, owned by Andres Gonzalez, jumped their way to a clean round securing a jump-off. A lucky streak was on for Mexico, as the country’s number one ranked rider since 2010, Nicolas Pizarro and his own Barbaro followed with a clear trip.

2014 Great American $1 Million Grand Prix winner Andre Thieme of Germany riding his own Conthendrix challenged the Latin riders with a clean round making it four for the jump-off. Next up was FEI Nation’s Cup™ Irish team rider, Kevin Babington, of Gwynedd Valley, Pennsylvania, and Shorapur LLC’s Shorapur who got the job done bringing the jump-off count to five.

Kraut and her 17-year-old grey were 34th to go and in a fault free trip the pair was back on their A-game.

“Cedric was more like he normally is. He was on form and I felt as confident as I could feel,” said Kraut. “I’m not going to lie I was shaken up from the other day – it was out of character for him to misjudge a triple. I was relieved it was a one to a one today so he couldn’t miscount. I’m so pleased and lucky to have him.”

“He’s a veteran. That horse knows how to get out of jail. He came out today and made up for the other day,” Kraut continued.

Riding for Gotham Enterpizes, Georgina Bloomberg of New York, New York, with her FEI Nations Cup™ superstar mount, Juvina, made it two-in-row for the U.S. riders with a clear trip to lock in the seventh jump-off spot.

Betancourt was first to return for the abbreviated jump off course and succumbed to two downed rails for a total of eight faults in a time of 41.03. Larrea was next, but she and her 10-year-old grey had one down rail for four faults with a time of 40.26. The race for a podium finish was on as Pizarro sped through the seven efforts clean setting a time to beat of 39.67. Ready to one-up Pizarro, Thieme did just that with a clean round in a time of 37.64.

Spectators were on the edge of their seats when Babington and his Nations Cup mount entered the ring. The pair cleared the course in a time of 36.45, one full second faster than Thieme.

“She’s unbelievably careful and I’m very pleased with her today,” said Babington of Shorapur. “Even though she jumped a double clean round in the Nations Cup there were a few sticky moments. I went to a much softer bit today and I still had plenty of control. She’s on track for where I want her to be.”

The crowd went silent as Kraut navigated her way through the ring and upon the final obstacle, with zero faults in her tracks she flew through the timers clocking in at 36.04 to take the top spot bumping Babington to second and Thieme to third.

“I didn’t think I had it. The seven from 1 to 2 was so forward. I cringed when he left the ground because I thought he was going to hook it behind. It was my lucky day,” said Kraut.

“I thought this weekend was brilliant. The Nations Cup Friday was absolutely perfect. The footing was great,” added Kraut. “I thought the jumps were beautiful. Each day was great. We really enjoyed ourselves as a team.”

The pressure was on for Bloomberg who was the final competitor of the day. Smooth at the start the pair soon faced a down rail for four faults in a time of 42.25 for fifth place.

“It was a great weekend for HITS. We’ll run 80 Grand Prix this year, and we run the three biggest prize money classes in the United States – but I still think we needed to make a statement with the Nations Cup this week. And I think we accomplished that,” said HITS President and CEO Tom Struzzieri. “It was a great success for us and it was wonderful to have this group of horses and riders here. Hopefully we’ll put the pieces together to be able to do it again.”