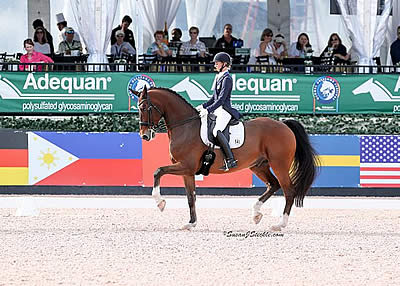 Wellington, FL – January 26, 2017 – 2016 Olympic bronze medalist Laura Graves (USA) and her horse Verdades won the FEI Grand Prix CDI-W, presented by Yeguada de Ymas, on the opening day of the third week of the 2017 Adequan® Global Dressage Festival (AGDF). The competition, which runs from January 26-29 and is presented by the US PRE Association, is held at the Palm Beach International Equestrian Center in Wellington, FL.

Coming in on the top of the leaderboard in the FEI Grand Prix CDI-W, presented by Yeguada de Ymas, was Laura Graves and her 2016 Rio Olympic mount Verdades, a 2002 Dutch Warmblood gelding (Florett AS x Liwilarda), earning an impressive score of 76.660% and a standing ovation from spectators.

Graves commented, “This is now his (Verdades) fourth year doing the big tour, and if I’ve learned anything, it’s that you have a plan and you also have ten other plans. He’s a super honest horse. His pirouettes can always be very good. I thought he was very rideable in those today. His half passes were nice.”

This was the pair’s first time in the show ring since their Team Bronze Medal win for the USA at the 2016 Rio Olympics.

“He’s notorious for being super sensitive. I was really thrilled about how he came out and he schooled super, and then went through the test really trying his best,” said Graves.

Regarding the future and her goals, Graves said, “I really hope to qualify for the FEI World Cup Finals. Hopefully because it is so close, we can make it happen this year!”

Fourth place finishers Kathrine Bateson Chandler (USA) and Alcazar, a 2005 KWPN gelding (Cantango x Polina) owned by Jane Forbes Clark, were awarded the only 10 of the day, on their final halt from Judge Christoph Hess (GER) at E.

Earlier in the day, Jaimey Irwin (CAN) and mount Donegal V, a 2008 Dutch Warmblood gelding (Johnston x Remy x Gribaldi) owned by Team Irwin Supporters Group, captured a win in the FEI Prix St. Georges CDI 1*, presented by the Chesapeake Dressage Institute, with a score of 70.746%.