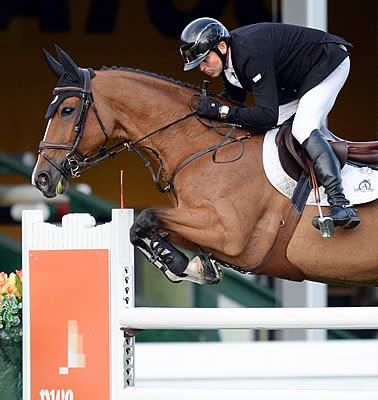 Calgary, AB, Canada – The ‘North American’ Tournament CSI5*, presented by Rolex, kicked off at Spruce Meadows on Wednesday with three feature competitions in the International Ring and two wins in a row for Canada’s Eric Lamaze. The ATCO Energy Cup 1.50m saw a win for Lamaze and Rosana du Park, and the PWC Cup 1.55m wrapped up the day with a second victory for Lamaze aboard Fine Lady 5. The AON Cup 1.50m was held earlier in the day with a win for Daniel Coyle (IRL) and Fortis Fortuna.

Spain’s Santiago Varela is the course designer in the International Ring for this week’s competition. Varela concluded his first day with 27 entries in the PWC Cup 1.55m, and a six-horse jump-off that saw a top three finish for Canada. Lamaze and Fine Lady 5, a 13-year-old Hanoverian mare (Forsyth x Drosselklang II) owned by Artisan Farms and Torrey Pines Stable, won the jump-off with the fastest clear round in 42.67 seconds. Tiffany Foster (CAN) guided Artisan Farms and Torrey Pines’ Tripple X III to second place honors in 44.81 seconds, and Yann Candele (CAN) jumped the Watermark Group’s Showgirl into the third position in a time of 45.01.

Commenting on his winning mount, Fine Lady 5, Lamaze stated, “Fine Lady is a great story. Artisan Farms purchased her for me. We were not sure where we were going, but we knew for sure we had a winner in the 1.50m. She had proven that with her previous rider. Sometimes you click with a horse and you get a little bit more, but I feel like she would do anything for me. She is a fantastic mare with a lot of heart and she just keeps jumping well. She is confident and I know her really well, so she is turning into a really special horse for me.”

Detailing the tiebreaker, in which he was last to go, Lamaze detailed, “Tiffany had the misfortune of going first in the jump-off. So many of these competitions at Spruce Meadows are won with the last rider going in, as you are able to get a feel for the track and how fast you need to go. Going last is definitely a big advantage in most competitions here at Spruce Meadows.”

Speaking of her own jump-off with Tripple X, Foster added, “It was actually a really nice jump-off for my horse because he has a really big stride and it was really open. If you just looked at the two of our horses standing next to each other, mine is a lot bigger than Eric’s. For me to gallop on a big stride is actually not that fast for me, but I thought my horse jumped great and I was really happy with him.”

With the Olympic Games in Brazil approaching, and the Canadian Show Jumping team yet to be announced, the riders are hoping for the best and feel confident knowing that they are performing well with their top mounts.

Speaking of the top three finish for Canada, Lamaze concluded, “It is all in the Artisan Farms and Torrey Pines family, and any time we can pull this off I think it is a great day for all of us. We all cheer for each other. We are there through the bad days and the good days and sometimes it all goes our way.”

The ATCO Energy Cup 1.50m speed competition saw a first win for Lamaze earlier on Wednesday competing with Rosana du Park out of 57 entries and 22 clear rounds. Lamaze put his name on the trophy for the fourth time after also taking victory in the competition with Hickstead in 2005, Coriana van Klapscheut in 2010, and Fine Lady 5 in 2014. He and Rosana du Park, the 11-year-old Selle Francais mare (Kannan x Ukase) owned by Artisan Farms and Torrey Pines Stable, clocked the winning time of 65.40 seconds.

Commenting on his win, Lamaze stated, “There are a lot of 1.50m competitions throughout the summer tour and they are all important, but for me, to win in the International Ring always means much more. To see Hickstead and Coriana and Fine Lady’s names on this trophy just brings back some great memories.”

Seventeenth in the order of 57, Lamaze had to wait many rounds to see if his time held up for the win, but he felt confident in his round.

“You never know for these competitions,” he admitted. “The only thing I can say is that she (Rosana du Park) is extremely fast and I did leave a stride out from the Liverpool to the vertical. I am the only one that did six strides there. I think I had a pretty good trip. It went as I thought it would, but there are always riders behind you that watch you go, and get an idea where to knick you here and there. I was lucky enough today; Conor came pretty close.”

Eric Lamaze raises the trophy for his first win of the day with Pat Creaghan, President, ATCO Energy.

Always a cool character, Rosana du Park proudly accepted her winning ribbon and cooler, and led the victory gallop to the thrill of fans.

Commenting on the mare’s professional demeanor, Lamaze stated, “She is pretty cool; she is a great show horse. She is a worker and she just knows where she is.

“She is my Hickstead of the speed classes that can also jump a 1.60m if I ask her to once in a while,” he continued. “She is a really experienced speed horse and I was saying how great it is to come to Spruce Meadows with one of those. Other riders have younger horses or maybe horses that are not quite as fast. I love to have one that can compete in these classes that you know you can win with. It kind of sets the tone for the week.”

The AON Cup 1.50m was the first competition held in the International Ring on Wednesday featuring 49 starters over Santiago Varela’s (ESP) one round speed course. Fifteen entries were able to clear the course without fault, while eleven others finished on time faults. The fastest clear track belonged to Ireland’s Daniel Coyle aboard Susan and Ariel Grange’s Fortis Fortuna in 60.50 seconds. Their time pushed Conor Swail (IRL) and Ilan Ferder’s Kanisso into second on their time of 60.66 seconds.

Daniel Coyle has earned multiple wins on different horses throughout the Summer Series at Spruce Meadows, but this was his first big win in the International Ring. He and Fortis Fortuna also won last week’s Friends of the Meadows U25 Cup in Meadows on the Green, but this victory was special for the 21-year-old rider.

“It was fabulous. It is always brilliant to win an international competition, especially in that International Ring,” Coyle remarked. “Last week, I said that I was going to jump a 1.50m on that horse after the she won the U25, and I did and it did not go well. So I decided to do one more and she won it. She was very good; she should have a bright future that one.”

Fortis Fortuna is an 11-year-old Belgian Warmblood mare (Quidam de Revel x Carthago) that is stepping up to the top level along with her young rider. Second place finisher Conor Swail, who Coyle works with closely at Ariel and Susan Grange’s Lothlorien Farm, previously rode the mare. The two Irish riders were in a league of their own on Wednesday, finishing well ahead of their other competitors.

Coyle detailed, “In the warm-up, Conor still had his other horse Cita to jump, and she is very fast and has won a bunch of classes here. I said to him, ‘I think you have it won, unless I beat you.’ And I did! We never really got a chance to talk about the course, so I did that one all on my own. I am very happy. I would say Conor and I had very similar rounds, but my horse was just that small bit faster than his horse, and that is where the difference was.”

Speaking about the experience of jumping in the impressive atmosphere of Spruce Meadows’ International Ring for horse and rider, Coyle added, “For a young horse, it is brilliant for their experience. For an older horse that has done it for a while, they go in there and the atmosphere is different and the horse can sense that, and so can I obviously. There is always more pressure on, and some horses rise to it and some horses don’t. It is a fabulous ring; it is one of the best rings in the world, and there is always a crowd here. It is a lovely place to jump.”

The ‘North American’ Tournament, presented by Rolex, continues on Thursday featuring the ATCO Cup 1.50m, the Sun Life Financial ‘Reach for the Sun’ 1.50m, and the Progress Energy Cup 1.55m.