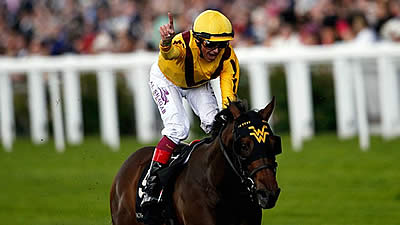 Leading American sprinter Lady Aurelia is set for a return to Royal Ascot this year 12 months on from her impressive victory in the Group Two Queen Mary Stakes on what was only the second run of her career. Wesley Ward’s runner is the bookmakers’ favourite for the King’s Stand Stakes which is one of the leading races on the opening day of the meeting.

Frankie Dettori opted to ride his filly front of the field in the two-year-old-contest in 2016 and the pair made all, stretching away from their rivals inside the final 200m of the race. Ward’s filly returned to Europe last August for the Group One Darley Prix Morny at Deauville in France. She was made to work hard on that occasion as the margin of the victory was less than a length ahead of Alrahma, with the Aidan O’Brien-trained Peace Envoy a further head back in third.

Lady Aurelia made her seasonal reappearance back in April at Keeneland in the Giant’s Causeway Stakes which is a Listed contest over 1000m on turf. She proved too strong for her fellow American sprinters as she recorded her opening win as a three-year-old. That run was scheduled to ensure she had an outing under her belt before her return trip to Europe. She can be backed at +500 with the bookmakers to score in the King’s Stand Stakes, however, if you are having bet at Royal Ascot or any other sporting event this summer, take a look at the best sign-up offers before you do so. If you want to bet with bitcoins, visit sportsbet.io as you will able to transfer funds from a number of different currencies into your digital wallet.

One of the leading threats to Lady Aurelia’s chances of a repeat Royal Ascot victory later this month is Marsha from the Sir Mark Prescott yard in the UK. The four-year-old won the Group One Qatar Prix de l’Abbaye de Longchamp at Chantilly last season. That is the leading sprint race in Europe and is staged on the Prix de l’Arc de Triomphe day. The British sprinter has also started this season strongly with success in the Palace House Stakes at Newmarket where he got up by a neck ahead of Washington DC.

Lady Aurelia is also scheduled to take on her former stablemate Acapulco in the 1000m contest. The four-year-old switched to Ireland to join O’Brien’s Ballydoyle yard back in April.  The American-bred filly also won the Queen Mary Stakes when she was with Ward, while she also finished second in the Group One Nunthorpe Stakes at York. She made her debut for her new trainer last month where she won at the Curragh in what was her first run in six months. She is expected to be partnered by Ryan Moore once again at Royal Ascot.

Ward is expected to return to the UK later this year with Lady Aurelia and a number of his leading sprinters for some of the other big meetings on the calendar including Glorious Goodwood and York’s Ebor Meeting in August.