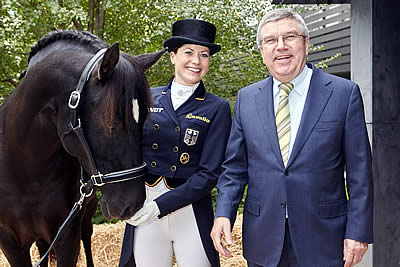 Bröring-Sprehe (29) and the 15-year-old Hannoverian stallion Desperados FRH have jumped to the top of the FEI World Dressage Rankings for the first time in their career, breaking the 30-month reign of Dujardin and Valegro.

Knowing how important gender equality is to the Olympic movement, she told Thomas Bach how proud she was to be a female Olympic athlete.

“Equestrian is the only Olympic sport where men and women compete against each other for medals in all the disciplines,” she said at the time. “It’s only when you get a bit older that you realise just how special this is, and it’s one of the many reasons why equestrian sport is so popular with women of all ages.”

Bröring-Sprehe and Desperados FRH now have a 68-point lead over Dujardin and Valegro, with fellow German and four-time team gold Olympic medallist Isabell Werth in third place with Don Johnson FRH on 2,428 points.

Bröring-Sprehe started riding aged three, after being surrounded by horses from an early age. Her family owns and operates Gestut Sprehe Stud near Löningen in Germany’s Lower Saxony region.

Partner’s promise & Olympic spirit: Bröring-Sprehe’s husband Christian Bröring had to cycle to London to watch her compete at the London 2012 Olympic Games, after promising he would travel there by bike if she qualified. The trip took him six days.