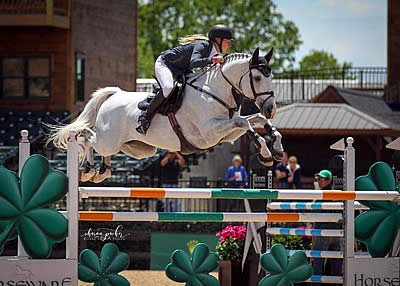 Mill Spring, NC – May 4, 2016 – Kristen Vanderveen (USA) and Bull Run’s Faustino De Tili were unbeatable in the first FEI class of the season at Tryon International Equestrian Center (TIEC), as the duo picked up their first major win at the venue since last year, finishing the $35,000 FEI 1.45m Horseware Ireland Speed Stake with a time of 66.25 seconds. Samuel Parot (CHI) piloted both of his mounts to a top three finish, earning second place aboard Couscous van Orti, crossing through the timers in 67.34 seconds, while collecting third on Atlantis, who finished just off the pace in 67.42 seconds. Tryon Spring 3 continues tomorrow with the $35,000 FEI 1.50m Suncast® Open Welcome.

“I was super excited when I walked this course because there was so much open galloping space. There was only one related line and this stallion just has a massive step,” she said. “He’s deceptively fast and those hard turns, which you think he wouldn’t be agile with, he is. To that left side, he just flies off the turn and the two places on course today with tight turns were to the left.”

“He stepped in there and felt comfortable with what I was asking of him. He has that big rangey stride and this course was made for him. We changed his bridle this past winter and he’s going in a very plain snaffle. We’ve built a great partnership and I understand him more. We think of each other a little bit differently now and we’re finally working as a team,” noted Vanderveen, elaborating on the progress the duo made this past winter at the Winter Equestrian Festival (WEF) in Wellington, FL.

The pair made their career debut together last season at TIEC and captured several top place finishes at the venue before focusing on their consistency and accuracy during the winter circuit, in which they also amassed solid finishes.

“This was his first class out since WEF 10. He’s had a bit of time off and a good vacation because he showed all the way through the circuit. I wasn’t sure if starting right away in the 1.45m was going to be a little bit too much, but apparently not,” she smiled.

In an effort to strengthen their growing partnership, Vanderveen felt the class gave her an opportunity to test Bull Run’s Faustino De Tili, as the pair has not contested many speed classes together. She explained, “Actually, it was great I got to do a speed. I haven’t had a real chance to practice a lot of speed classes or jump-off rounds, so I would love to see that keep developing. He’s a very fast horse; I just need to figure out how to push all of the right buttons.”

Competition at TIEC continues with Tryon Spring 3, hosting the $35,000 FEI 1.50m Suncast® Welcome Stake Thursday, May 5, and the first “Saturday Night Lights” event of the season, on Saturday, May 7, with the $130,000 FEI Asheville Regional Airport Grand Prix CSI 3* beginning at 7:00 p.m.