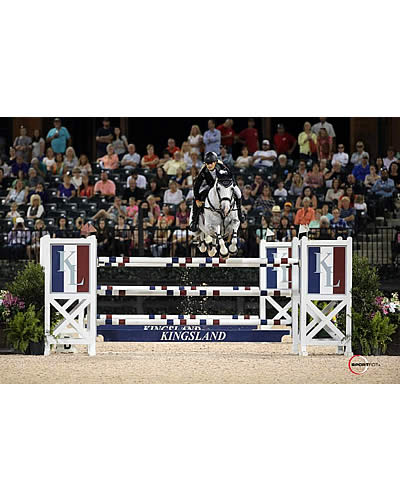 Mill Spring, NC – May 30, 2015 – Tryon International Equestrian Center (TIEC) hosted the first FEI Grand Prix of the season, showcasing the $127,000 Kingsland Grand Prix CSI 3* in the George H. Morris Stadium in front of the largest crowd to date. The class of 38 entries was led by Kristen Vanderveen (USA) aboard Bull Run Jumpers Five LLC’s Bull Run’s Faustino De Tili, who bested the jump-off with a time of 43.926 seconds, just a tenth of a second faster than Sharn Wordley (NZL) and Sky Group’s Casper who finished in second. Wordley also took home third place honors aboard his own Corino. Tryon Spring 7 concludes tomorrow with the $25,000 Grand Prix beginning at 2:15pm. The Tryon Spring Series will conclude next Sunday, June 7.

With her first ever FEI win, Vanderveen was all smiles leaving the ring after it was announced that she had barely edged Wordley in the jump-off as the last ride of the night. Vanderveen was aware of the time she needed to beat and decided to ride a bold jump-off round to go for the win.

“I had a really good feeling this morning when I woke up. You know you sometimes just wake up with that feeling and it was specifically for this horse too,” she smiled. “When I walked the course I thought it was a good course and I liked it because it was bigger than anything else we’ve seen this week. It was really friendly for the first FEI week, which I think is really appropriate and worked out great for me. I know he can turn extremely fast to the left and I went for it when we turned to the Kingsland combination in the jump-off and I think that’s how we got the win.”

The duo has only been partnered for a few months, as “Frosty” is a relatively new ride for Vanderveen, purchased from Europe during the Winter Equestrian Festival in Wellington, FL, only a short time ago. Bull Run’s Faustino De Tili came with an already impressive record, which Vanderveen felt pressure to uphold after she took over the ride.

“We’re relatively new together and he’s taken me a little bit of time to figure out because he’s really sensitive. The idea of coming to TIEC was to get all of my horses in a place where we could stay for the entire season so that I can work on my riding,” explained Vanderveen. “I have some new horses here and I wanted to make sure that we were in a place where we weren’t over stimulating them with travel and a ton of venues. I wanted a base where we could just get to know each other better.”

Bull Run’s Faustino De Tili is a powerful and stunning stallion with a very soft side according to Vanderveen, who says he’s a total ham in the barn. Not typically drawn to riding stallions, “Frosty” has been a pleasant surprise for her and she hopes that their partnership will continue to build in the coming weeks at TIEC with additional FEI classes on the horizon.

“He’s great and very experienced. We bought him knowing that he already had an accomplished record and I’ve just been waiting for us to click and start to understand each other and that definitely happened tonight,” she said. “In the warm-up on Thursday was when I really felt us starting to understand what the other was asking for. I felt a little bit different about how he wanted me to ride him and ever since that he’s been fantastic.”

The duo has started to string together very consistent performances and their potential continues to grow. Collecting their first major win together has been a highlight of Vanderveen’s time at TIEC and she is looking forward to continuing to strengthen their partnership in the coming months.

“He’s still relatively young; he just turned ten this year and there is definitely an adjustment period when you switch riders, which I think he’s still getting used to,” she commented. “Our partnership is starting to build and we’re beginning to trust each other more. I was transitioning him to a much lighter ride, which I don’t think he was used to and now he’s starting to trust that and we’re compromising so that I can get to where he’s comfortable too.”

Vanderveen also had another ride in the class, Bull Run’s Testify, her more seasoned partner, who finished in 13th with just a single time fault. The pair has consistently performed well this year and Vanderveen was thrilled with the results on both of her horses tonight.

“Testify is very natural for me. I absolutely love him. I’ve been having some issues with time faults, which is completely on me and he’s just been a superstar. His way of going is a little bit slower, so I have to figure out how to get to the next round,” she laughed. “Clean rounds are clean rounds. I couldn’t be asking for anything more from my horses. I’m so proud of the way they’ve been going.”

Vanderveen and Bull Run Jumpers will continue to base themselves at TIEC for the remainder of the summer season, with plans to contest the rest of the FEI classes being offered at the venue throughout the Summer Series to start in July. Finding a venue that allowed her business to stay in a central location for a significant period of time is what drew her to choosing TIEC as their summer destination hub.

“We’ll be here throughout the remainder of the summer, which has worked great in terms of us being able to give all of our horses, no matter the level, consistent and solid experience,” said Vanderveen. “This place is going to be amazing and everything has been spectacular. The footing has been great and we’re really excited for some of the amenities to come like the on-site trails and the derby field. It’s a really exciting place to be.”

Tryon Spring 7 concludes tomorrow with the highlight $25,000 Grand Prix in the George H. Morris Stadium, as well as several hunter classes crowning divisional champions throughout the day. For more information on TIEC and a full list of results, please visit www.tryon.com. Please “Like” the TIEC Facebook page at www.facebook.com/tryonresort to be eligible for various contests and promotions.