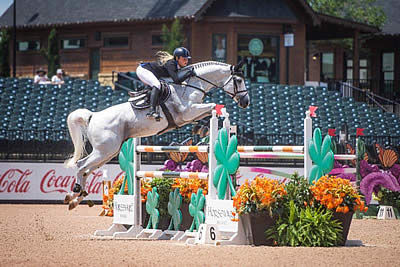 Twenty-four pairs tested the first round set by Catsy Cruz (MEX), with seven entries returning for the jump-off. Vanderveen was already winning aboard Bull Run’s Faustino de Tili when she closed out the class aboard Bull Run’s Prince of Peace and placed sixth on a time of 40.423 seconds and one rail down.

“I thought the course was great,” said Vanderveen. “It was very fair and open, but at the same time the course caught everybody a little bit, which is great. She did a great job.”

Vanderveen and “Frosty,” the 2005 Belgian Warmblood stallion (Berlin x Darco) owned by Bull Run Jumpers Five LLC, have seen great success at Tryon throughout their career together, and the venue suits her horse so well that she made a change in plans and saved him to compete this week, Vanderveen commented.

“It’s nice to be back with Frosty. I was actually in Kentucky last week with him and I could just tell – I thought, ‘Nope, we are going to save him for all three weeks in Tryon, because he loves it there.’ This is his thing,” Vanderveen continued. “He has had a little vacation for the last week or two, and has been saving his energy, so it’s nice that it paid off today.”

The result was another Tryon win and their 30th FEI win together, Vanderveen detailed. “It was kind of a special win because it was his 30th FEI win since I’ve had him. We’ve been keeping an eye on it and trying to get to 30. My first 5* Grand Prix win was here, too.”

Vanderveen will save Bull Run’s Prince of Peace for Sunday’s $36,000 1.45m Jumper Classic CSI 3*, and plans to compete Bull Run’s Faustino de Tili in Saturday’s $72,000 CaptiveOne Advisors Grand Prix CSI 3*. She revealed that she will be spending the next few weeks at TIEC to prepare for an upcoming trip to Europe:

“We will be here through the 4* competition and then we are doing something a little different this year. Showing here is also a lot of prep for that. What better can you do to prep than come here? I was originally going to leave Frosty stateside, and just recently decided to bring him along [to Europe]. He has proven today that he wants to come!”

Minikus and the 2009 Zangersheide mare (Andiamo Z x Landaris) owned by Bit By Bit Group “maybe did one or two less strides back to the combinations” to gain the advantage over the field, he explained. “The course rode nicely, and it was a nice opening class for all the horses, but it was very competitive by the time we got to the speed phase. The riders in the class are extremely competitive.”

Team Minikus has just arrived in at TIEC, and he noted that he’s encouraged to see such a positive start to his Tryon campaign after a less-successful tour than hoped in Kentucky this spring. “It’s nice to start off here with a little better success than what we were having in Kentucky earlier since I didn’t have that good of a tour. She will show this week, and I’m planning for her to be in the Grand Prix on Saturday as well,” Minikus concluded.

Hesslink has been paired with the 2011 Warmblood gelding (Conthargos x Balouville) since late winter, but the combination has already proven successful, he relayed.

“We call him Conor, and he’s great. He’s done three shows, and has been champion at two, and reserve at the other. The lowest score he’s had is 85. He’s been amazing and has made very few mistakes,” Hesslink said. “He is such a dream to have!”

Hesslink and “Conor” will be competing again next week at TIEC, and will return to compete in the Summer Series at TIEC.

“I really like the Grand Hunter Ring [Ring 4] here. It’s really big, so it’s nice that you can get on a gallop and keep one pace. Today the lines rode really nicely,” Hesslink continued of the course set by Joe Carnicom (Toledo, OH).

Hesslink concluded, “It’s a top facility, and it’s nice that they can have classes on the grass or in the George Morris Arena, too. I think it’s a really great place to bring young horses along and get a lot of experience and exposure to environment.”