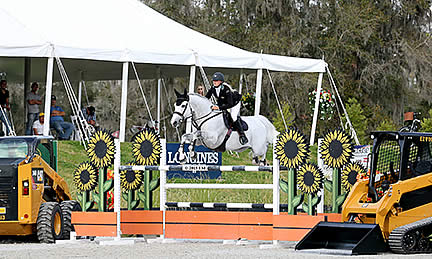 OCALA, Florida (March 1, 2015): The bleachers were full and the grass berms surrounding the Ocala Horse Properties Stadium were lined with spectators for Sunday’s $50,000 Ring Power Grand Prix, and fans were treated to an exciting class with a race to the finish. Kristen VanderVeen from St. Charles, Illinois came out on the top with an all-out gallop to the finish on Bull Run’s Faustino de Tili.

“I haven’t had him that long,” VanderVeen said of the winning horse, owned by Bull Run Jumpers Five, LLC. “This is maybe my sixth or seventh class with him. I got him in Belgium and he’s the first made-up horse I’ve ever had. He was already showing and doing quite well so when he got here he was ready to go. Today the distances just showed up.”

Forty-two top quality horses competed over the 470 meter course, which was the longest course of the day. Brazilian Course Designer Anderson Lima set the course to National Standards and while the distances were friendly, many fences were set at maximum heights. The verticals were set as high as 1.53 meters and the Sore No-More vertical at fence eight was responsible for faults 16 times. The Brook Ledge oxer at fence 10 was also the source of many faults. It was the biggest fence on the course, set at both maximum height and width. Only seven horses had clear first rounds and moved on to the jump-off.

The jump-off consisted of nine efforts with three fences that had not been included in the first round. The third element in a triple combination in the first round was removed and the opening line was a bending seven or eight strides. Two double combinations were included back-to-back, and long gallops to the final two fences offered the opportunity to shave corners for faster times.

First to jump-off was S & L Elite, owned by S & L Farms, with Dorothy Douglas from Flower Mound, Texas. They left out a stride in the first line and were on track for a great trip when they tripped the back rail of the oxer at 7a for four faults in 52.141, which earned them sixth place.

Wayfarer, owned by Lionshare Farm and ridden by Peter Leone of Greenwich, Connecticut, was up next and downed an early rail after taking eight strides on the first line. He picked up the pace after that and finished fourth as the fastest with four faults in 50.976.

“Million Dollar Man” Andre Thieme, from Germany, went next on his own Conthendrix and he easily cleared the course in 47.202 setting the Great American Time to Beat. Shaking his head as he came out of the ring, he appeared to sense that he had left the door open for a faster time by perhaps being overly cautious over the last two fences.

His clear round remained in the lead through the next two combinations as Titus 2:11 and Jared Petersen of Archer, Florida had four faults, finishing fifth in 50.946, and Amanda Flint of Long Valley, New Jersey retired on the Coverboy Group’s Balotan to finish seventh.

Sixth in the jump-off order was VanderVeen on Faustino de Tili. Spectators gasped as they reached the first combination in stride and never looked back. Their time of 46.093 shaved a full second off Thieme’s mark to take a commanding lead.

The final horse was Arrayan, ridden by Eduardo Salas of Wellington, Florida and owned by Fabian Ordones Tello. The classic bay jumped clear in a time of 49.422 for third place.

VanderVeen has won multiple Grand Prix over courses designed by Lima and this even confirmed his status as her favorite designer. “I couldn’t believe the way we met that combination. I figured there is no taking back now,” she said. “I did the eight down the first line because I don’t know his stride that well.”

Second-place winner Thieme expressed frustration for not speeding over the last two fences. He knew as soon as he stepped out of the ring that there was a good possibility that his time wouldn’t hold up. After VanderVeen took the lead, he said, “I told you, the last two fences!” but was ultimately very happy with his horse.

Third place winner Salas said, “I thought the course designer did a great job. It was technical and difficult everywhere. I have just been here a few weeks and I think the horse show is very enjoyable.”

Fourth place winner Leone was riding a horse that he bred himself and was foaled on his farm. The 9-year-old showed potential as Leone takes aim at the Saugerties $1 Million Grand Prix later this year. He said, “My horse was excited on the first line and lost his canter and didn’t sight in on fence two. I thought the course was great, the right number of clears and the right horses won.”

Less than three weeks of Grand Prix qualifying opportunities remain for the Great American $1 Million Grand Prix at HITS Ocala on Monday, March 23, at 6 p.m. Stay tuned to see who will earn a chance to compete in the second jewel in the HITS Triple Crown of Show Jumping.