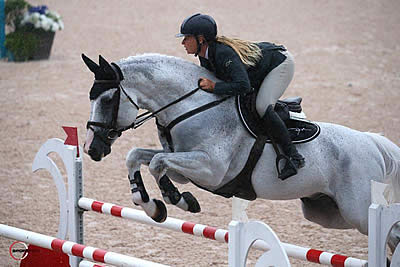 Mill Spring, NC – July 19, 2018 – Kristen Vanderveen (USA) and Bull Run’s Faustino De Tili charged to a victory in the $35,000 Welcome Stake CSI 2* to open Tryon Summer VI competition at Tryon International Equestrian Center (TIEC) on Thursday, completing the short course in 34.252 seconds to once again land on top of the podium. Second place was claimed by Samuel Parot (CHI) aboard his own Harley David, a 2007 Dutch Warmblood gelding (Harley VDL x Randel Z), finishing on a time of 36.149 seconds, with Darragh Kerins (IRL) guiding Chill R Z, a 2003 Zangersheide stallion (Chellano Z x A Lucky One), to third on a short-course time of 37.351 seconds for Eve Jobs.

Twenty-six horse-and-rider pairs tested the Oscar Soberon (USA) course, with nine pairs moving forward for the jump-off round. Vanderveen explained that she was able to use the design to her advantage with “Frosty,” a 2005 Belgian Warmblood stallion (Berlin x Udarco) owned by Bull Run Jumpers Six LLC, and was happy to see so many bending lines throughout the course.

“I really, really like the designing this week – the course was great. It’s just right for us since we’re getting Frosty going again for some bigger shows, so this was a nice warm-up for him,” Vanderveen elaborated. “The bending lines were nice today because he was quite excited since he’s had a week off, so I was actually able to just leave out strides in the first round, which for me is a little bit easier than if it’s a super technical course with a lot of straight lines. I can’t really get away with that, so it was nice today that I could kind of ad lib the lines a little bit and make it work for the first round. In the jump-off he was calmer and ready to go.”

The pair was able to best the class by almost two seconds and Vanderveen revealed that her plan is to continue competing with Frosty in order to prepare him for the $70,000 Ingles Grand Prix CSI 2*. “I’m actually going to jump him again tomorrow – he felt quite fresh today, so we’re going to go again today and go from there to decide on Saturday.”

Vanderveen and Frosty are gearing up for some CSI 3* competitions in Michigan next en route to 5* competition in Chicago, and she expressed excitement for the Tryon Summer VI schedule as part of this preparation, saying, “It’s really nice to have all these $35,000 classes in a row this week – it’s fun for me to get to jump every day.”

Frosty was not the only mount Vanderveen piloted through the Welcome Stake – Bull Run’s Prince of Peace, also known as “Prince”, a fresh face on her FEI string who has begun proving his talent at TIEC in recent weeks, finished on just one rail down that Vanderveen claimed as her responsibility.

“Prince I was super proud of. I actually had a big rider error in a line. He’s so adjustable and can do any number of strides, but I just got stuck trying to adjust him and I felt bad for him,” she said of the 2009 Holsteiner gelding (Cardenio x Contender). “He wanted to jump clean today, but his rider made a mistake and tipped one [rail] out, but I think he’s going to go again tomorrow as well.”