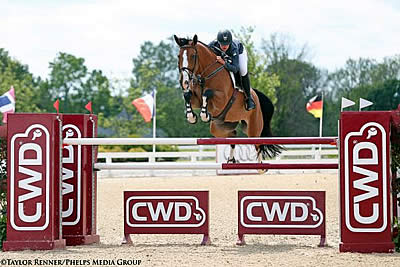 Lexington, Ky. – May 15, 2016 – The Kentucky Spring Horse Show wrapped up on Sunday in the Rolex Stadium with the featured national classes: the $25,000 Under 25 Grand Prix followed by the $50,000 Commonwealth Grand Prix. Kristen Vanderveen and Bull Run’s Eternal outpaced a 15-horse jump-off to grab the win in the $50,000 Commonwealth Grand Prix, presented by Audi of Lexington, which also counted towards valuable points earned in the Rolex/USEF Show Jumping Ranking List.

After consistently producing clear rounds all week, Vanderveen and Bull Run Jumpers’ Bull Run’s Eternal proved to be a force to be reckoned with after beating Aaron Vale and Carlo’s early jump-off lead of 42.001 seconds by three full seconds.

“It was so nice to finally get it all together,” said Vanderveen. “He’s actually the horse I’ve owned the longest. I’ve had him for three years so we really know each other quite well, and that really helped today in the jump-off because it was pretty fast.”

47 exhibitors navigated the Bernardo Costa Cabral-designed first round course, consisting of 13 obstacles, which challenged riders with a double and triple combination, a triple bar fence and multiple tight rollbacks in a time allowed of 81 seconds. The jump-off revealed a seven-fence serpentine with many large oxers that resulted in faults for five of the 15 second round challengers.

Vanderveen and the 12-year-old Belgian Warmblood gelding were third in the jump-off order-of-go and broke the beam in 39.091 seconds, which set the pace for the rest of the 12 horse and rider combinations that would prove to be unbeatable.

“My strategy was to basically start with a gallop and be able to hold it the whole way,” said Vanderveen. “There were a lot of hard left turns right at the beginning in the jump-off, and he’s really handy to the left, so I was able to not worry too much about making the turn because he’ll cut left fast anyways. So I tried to start before jump one with a really good gallop and never take away from him. He did quite well with that.”

It did not look like anyone would come close to Vanderveen’s time until five rounds later when Andrew Ramsay and Cocq A Doodle, owned by The Doodle Group, entered the ring. They raced around the shortened track to catch Vanderveen’s time but only made it within 9/10th of a second, after laying down a solid double-clear effort, finishing in 39.942 seconds and taking second place honors.

Even as the second to last jump-off contenders were unable to catch Vanderveen’s time, she had already secured her win for the class by returning to the ring as the last entry to go in the jump-off round on her second mount, Bull Run’s Holy Smokes.

“Bull Run’s Holy Smokes is actually a little bit greener than [Bull Run’s Eternal] is,” said Vanderveen. “It was a really nice feeling to be able to come in and know that she doesn’t need to really run like crazy so I was going to go for a nice slow, clean round and then she hit the last jump down, but I’m still really pleased with her. She hasn’t done nearly as much as he’s done.”

Rounding out the top three in the Sunday finale of the Kentucky Spring Horse Show was Ramiro Quintana and Whitney, owned by St. Bride’s Farm. They tripped the timers in 40.215 seconds.

After a successful finish to the Kentucky Spring Horse Show, Vanderveen will be returning to Tryon next week to train clients, but always enjoys visiting and competing at the Kentucky Horse Shows.

“After this week, I think I should never leave Kentucky,” laughed Vanderveen. “I jumped clean in every single FEI class – it just hasn’t come to a win until today. I’m going back to Tryon next week. I have all of my clients in Tryon and they got this week off, so I’ll be back to help train them.

“I love the area here,” continued Vanderveen. “I love that the horses can graze and can go out on the trail rides. I think it’s so great for their minds. The stadium’s great as well. I love riding in a big ring. I have a lot of big horses with big steps so to be able to just open up and gallop around the course is how my horses jump best and go best, and I like to ride that.”

Earlier in the day, the Under 25 Grand Prix was held in the Rolex Stadium and the blue ribbon went to Noel Fauntleroy and her own Cabras, who bested a starting field of 26 and a jump-off field of 13.

“I started riding [Cabras] a little over a year ago in Florida last year,” said Fauntleroy. “She was part of the gold medal team and won an individual bronze medal at the North American Junior and Young Rider Championships last year. She is very comfortable. She might look a little hot, but she’s actually kind of cold. I have to get her going, but once I do she’s all game and will jump anything. She’s really brave.”

Fauntleroy and the 12-year-old Holsteiner mare were among six to produce double-clear rounds, finishing the fastest by one second in 30.003 seconds.

“My plan today was to just stick with the numbers,” said Fauntleroy. “The jump-off I thought was a really good test for the riders. From one to two there was an option for seven or eight strides, and I trust her a lot so I went with seven and knew that she would jump that. I made sure to go inside the gazebo after the two because I didn’t think anyone else had done that, and I think that might have been where I made up a little bit of time.”

Eve Jobs and her own Sandor De La Pomme were close behind Fauntleroy stopping the timers in 31.242 seconds to take second place, while Hunter Holloway and VDL Bravo S, owned by Hays Investment Corp., took the third place spot finishing in 32.489 seconds.

Having shown in the U25 series multiple times, Fauntleroy really appreciates the bridge the series provides for young riders to develop experience at competing their horses on an international level.

“I think it’s an awesome stepping-stone for young riders,” said Fauntleroy. “If you feel like you’re over-qualified for the highs but aren’t ready to go into the Saturday night classes yet, the U25 series is a perfect stepping-stone for that.”

In addition, Fauntleroy shared similar sentiments as Vanderveen in regards to competing at the Kentucky Horse Shows.

“Kentucky always has a really good atmosphere,” said Fauntleroy. “There’s lots of open space for the horses. The footing is always amazing. It’s been pouring rain and you can’t even tell. It’s really an awesome place to come!”

The Kentucky Spring Classic held May 18-22 will also feature a FEI CSI3* rating. The $35,000 Welcome Speed will be held on Wednesday, followed by the $35,000 Hagyard Lexington Classic on Thursday, as riders try to accumulate valuable points for the Hagyard Leading Rider Bonus. On Saturday, May 21, riders will compete under the lights in the Rolex Stadium during the $130,000 Mary Rena Murphy Grand Prix. Once again all three FEI classes will count for the Longines Ranking List and the Thursday and Saturday classes will also count for the Rolex/USEF Show Jumping Ranking List. In addition, the featured national classes will be the $50,000 Bluegrass Grand Prix, which counts towards the Rolex/USEF Show Jumping Ranking List, and the $25,000 Under 25 Grand Prix to be held on Sunday, May 22, in the Rolex Stadium.

Farmer took the lead in the first round on Baltimore, an 11-year-old Oldenburg gelding with a score of 189, taking all four high options on the Bobby Murphy-designed course. “When you jump the high options, he can jump careful and it doesn’t matter what you get,” said Farmer. “Long or deep, he doesn’t really care. He is that dependable, that careful, that brave – that’s him. No matter what I ask him he tries.”

With five horses in the class, Farmer was able to use each round to improve her plan for the next. “When we walked the handy and we saw the inside turns I thought they were ugly to be totally honest,” Farmer explained. “I did them on Need I Say because he is handy. I thought if he can do them then at least I know how hard or not hard they are. I kind of knew what I was going to do on Need I Say and was a little bit play-it-by-ear on the rest depending on what everyone else did and how it was going.”

Farmer and Baltimore excelled in the handy, pulling in scores of 89 and 90 from the judges. Adding on four points for taking the high options, and seven and five handy points, respectively, bringing their total score to 388. She was full of praise for Baltimore’s performance in the handy round.

“Baltimore can get so high and so careful,” said Farmer. “He can land and turn. He is so catty and his front end is so automatic. He’s a fantastic horse.”

Farmer also impressed the judges on Point Being bringing in a score of 369 and taking all of the high options in both rounds. Peter Wylde and Quax were right behind her in third place with a score of 368.5.

Hesslink started off the first round with a score of 90, taking all four high options. “My first round was a little conservative,” Hesslink said. “I was a little nervous with how the class was going, but I decided to do all the high options and I think that really paid off because not many other people did.”

Hesslink returned in the handy round taking three of the high options to a score of 89 and a total score of 179. “I liked my handy round a lot better,” Hesslink admitted. “I went all out and tried to do all the inside turns. I tend to be better at those and I thought both horses were amazing.”

Hesslink praised the course design for its ability to play to each horse’s strengths. “I thought the course was great. It was a lot of singles and long approaches,” Hesslink explained. “You were able to show your horse’s stride and ride the course out of a rhythm.”

Hesslink was enthusiastic about his experience here in Kentucky. “I came here last summer for the first time,” Hesslink said. “I really liked it and that’s why I’m back this year. I think the Kentucky Horse Park is an amazing facility and they do a great job here with everything from the jumps to the events and the prestige – they make it really nice for the spectators and riders.”