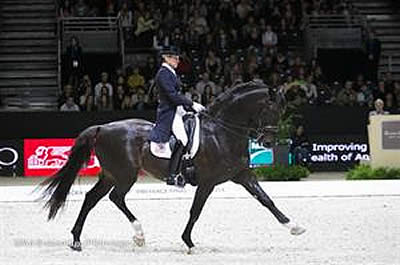 Konyot (Palm City, Fla.) and her 2010 Alltech FEI World Equestrian Games and 2012 London Olympic Games partner once again demonstrated an impressive trot-tour to score 70.443% for their Grand Prix test. However, a few mistakes including in the one-time changes and over-anticipation on final centerline kept the pair from scoring even higher. Additionally, they overcame an unenviable starting position, number one in the order, to finish the day in 11th place.

“I was very happy with my horse; I made some mistakes that cost me. But I am very pleased and it is an honor to be here,” said Konyot who did not let her pathfinder status on Saturday deter her from the task at hand. “It is always disappointing but someone has to go first. But I’ve been doing this awhile, so it didn’t affect me.”

Parra (Whitehouse Station, N.J.) and Michael and Sarah Davis’ Van the Man showed impressive work in their test on Friday but moments of tension kept them from landing higher up the leaderboard as they finished in 16th place with a score of 65.543%. After breaking to the canter in the first extended trot they rebounded with a solid finish to their trot work. However, following the walk tour the 14-year-old Dutch Warmblood gelding became nervous in the corner by M resulting in a disobedience and backing up.

Nevertheless, Parra was still pleased with the progress his horse has made in the last year and is excited about competing in Lyon.

“I’m very excited to be here; this is a beautiful venue,” said Parra. “At the beginning and going around the ring the feeling was very good and he was feeling very well. He’s grown up a lot and he feels more and more confident.”

As expected it was the world first and second ranked combinations battling it out for top honors on Saturday. Collecting second-place honors was the World number two combination and 2013 Reem Acra FEI World Cup Dressage Final champions Germany’s Helen Langehanenberg and Damon Hill NRW on a score of 83.343%. Finishing almost four points ahead of the field, and setting a new World Record as well, were the World’s number one combination and reigning Olympic and European Champions Charlotte Dujardin and Valegro of Great Britain. In their first ever Reem Acra FEI World Cup Dressage Final start they claimed the Grand Prix victory on a score of 87.129%.

All eyes will be on Dujardin in Saturday’s Freestyle as she debuts new music and tries to top her current Freestyle World Record of 93.975%.

“I can’t believe it; he never lets me down. Each year there’s a bit more and a bit more,” said Dujardin. “I’m very excited (for tomorrow). It will be a full house and it’s the music; it’s fun. I’m looking forward to it.”