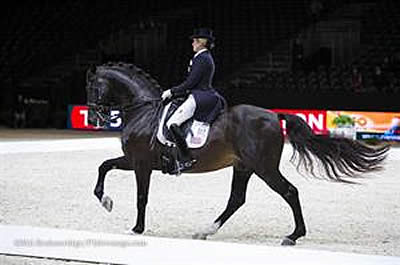 Entering the ring as the fifth combination of the day, Konyot (Palm City, Fla.) and her 16-year-old Danish Warmblood stallion, Calecto V, performed their trademark Freestyle set to the music of KT Tunstall and Beyonce. The 2010 Alltech FEI World Equestrian Games and 2012 Olympic Games veterans began with the strong trot tour they have been become known for; however, three-quarters of the way through her test Konyot forgot her floor plan resulting in a different ending to the test than originally planned.

“The beginning of my ride was beautiful; he felt fantastic. Then about three-quarters of the way through the ride I just drew a blank; it has never happened to me before,” said Konyot who was nonetheless extremely proud of her horse’s performance in Lyon. “He was great, wonderful. My horse felt superb.”

Parra (Whitehouse Station, N.J.) and Michael and Sarah Davis’ Van the Man had an improved performance over their Grand Prix ride to score 68.429% and finish in 16th place. The tension that had plagued the 12-year-old Dutch Warmblood gelding on Friday appeared nowhere in sight as he executed an obedient test set to up-tempo contemporary music.

“It was much better than yesterday and a great way to celebrate Easter,” said Parra who had plenty of praise for his developing horse. “He’s a nice horse; he’s very talented and just needs time to bloom.”

The day undoubtedly belonged to Great Britain’s Charlotte Dujardin and Valegro who had the crowd at the edge of their seats as rode their highly anticipated new Freestyle to earn a mark of 92.179% and claim the 2014 title. With their win in Lyon the pair now stand as reigning World number one, Olympic, European, and World Cup champions.

Finishing in second place were 2013 champions Helen Langehanenberg and Damon Hill NRW of Germany with 87.339% and third place went to The Netherlands’ Edward Gal and Glock’s Undercover with a score of 83.696%.