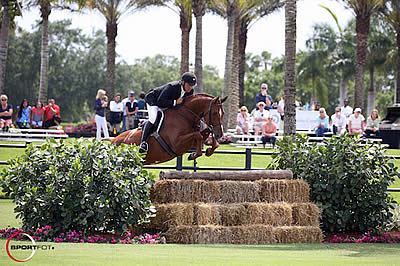 Wellington, FL – April 3, 2016 – The 2016 Winter Equestrian Festival (WEF) completed its final day of competition on Sunday with a win for Russell Frey and Nina Koloseike Moore’s Kodachrome in the $50,000 USHJA International Hunter Derby. Held on the beautiful grass field at The Stadium at the Palm Beach International Equestrian Center (PBIEC), the final feature of the circuit was presented by Dietrich Insurance and hosted by Tailored Sportsman, and sponsored by Charles Owen, Dover Saddlery, The Clothes Horse and Essex Classics.

The first round of derby competition was held in the E. R. Mische Grand Hunter Ring on Saturday, where 45 entries took on the first round course designed by Ken Krome. Two panels of judges scored each round, and riders were awarded extra points for jumping high options.

The top 24 entries then moved on to the derby field for Sunday’s handy round, jumping Bobby Murphy’s course with natural obstacles on the grass. Two panels of judges once again scored the contestants, awarding bonus points for high options as well as handiness on course. Judges Rick Fancher and Jack Towell scored the rounds on panel one, and Danny Robertshaw and Jim Clapperton judged the rounds on panel two.

Russell Frey and Kodachrome led the standings heading into Sunday’s final round with the high score of 185 in round one. The pair then earned the high score of 200 on Sunday for the winning two-round total of 385.

Kodachrome is an eight-year-old Warmblood gelding that Moore purchased for Frey last year with hopes that the gelding had Derby Finals potential.

“He was doing the 3’3″ Performance Hunters starting out, and I just saw him and liked him, and then I tried him and had to have him,” Frey stated. “He has learned and come along. This was his first really big derby. This was a different type of class, to show over at the horse show on the grand hunter field, and then to come over here just to do the handy round on the field in a completely different venue for all of the horses. It was a pretty good test for every horse and rider that was out there.

“He was a little nervous in different places on the course, but he seemed to handle everything okay,” Frey continued. “The jumps were not the issue; it was just a little bit of his anxiety and settling in. I thought he finished up the last half of the course really confident and that is always a nice way to end, so I was very happy with him.”

Speaking of Kodachrome’s winning style, Frey detailed, “He jumps in very correct style. He uses all of his parts. His front end comes up, his back gets high, and he has great follow through. The overall context of the jump from take-off to landing is very correct. He is pretty fearless when it comes to the jumps. I had never jumped him over the bank, and I have no idea whether he ever has in the past, and he jumped right up on the bank like he had been doing it all his life. Pretty much anything you point him at, he is okay with. He is an attractive horse, and he goes across the ground nicely. He gallops along nicely with a great rhythm, and he is appealing when you look at him.”

This was Frey’s first international hunter derby win and a momentous occasion in his career.

“It means a lot,” the rider stated. “I am relieved that we finally won one. I have gotten good ribbons consistently in the derbies, but I have never won one, much less won the first round. I have come back second and third, but there is pressure on both sides. One is to try to protect your lead. You have to be a little bit careful and not do anything too crazy, but by the same token it is never free.”

Samantha Schaefer and her own Classified sat second coming into Sunday’s round with a score of 184 carrying over from their first round. The pair then earned a score of 190 for their handy course, finishing second overall with a total score of 374. The 11-year-old Hanoverian stallion is Schaefer’s amateur hunter and this was only their third derby together.

“I thought he was great,” Schaefer stated. “I was a little bit spookier at the course than I think he was. Looking back, I think that in order to really win these classes in the future, you have to go for it and jump the high options and take some risks. Sometimes it pays off and sometimes it does not. Today, I feel like we did exactly what we planned when we walked the course. After I watched ten or so not do it successfully, I just had to walk away and remember that I know my horse, and I could not be worried about what everyone else was doing. I just had to ride what I was capable of. He was great. He is an awesome horse, and I had a lot of fun out there.

“I have had this horse a year and a half, and I think it was kind of meant to be for me to have him,” Schaefer detailed. “It took a lot of people to put it together for me to be able to have him. He has been an important horse for my career because I was in college, and as a junior I had a lot of horses to ride and was really in it and showing all of the time. Then when you are not doing it as much, it makes it really hard to come here and really feel like you have a shot. He has kind of been that horse for me to make me feel like I can be competitive again, and I can go in there and compete with the best. He has definitely been a big part of my career looking forward, so I am very lucky to have him.”

Amanda Steege and Susan Darragh’s Zidane made a big jump to finish third overall. The pair came into Sunday’s final round in 14th place with a first round score of 166, but a fantastic score of 197 over the handy track shot the pair up 11 spots in the final standings.

Steege and the 12-year-old Royal Dutch Warmblood gelding also jumped in last year’s derby at the end of the 2015 WEF circuit, and Steege came into this year’s class confident in her mount.

“I came back in 14th place today and moved up to third, but I think last year I came back even lower than that and I remember being a little nervous because we do not see venues like this very often, but he was so good last year,” Steege explained. “This year I felt very confident in the horse. I went out there knowing that I could do all of the high options and make as many turns as I could find to do out there. I was only in 14th place, so unlike Russell, I did not have anything to lose. I just thought the whole thing was a lot of fun, and I felt like my horse felt that way too. He was not nervous at all.

“He sort of eats up the atmosphere, and he certainly loves the grass,” Steege continued. “It feels like he has an extra little push out there. He can jump a little higher, and a little wider, and I do not have to ride careful to the jumps. I can gallop right up to them, and he sort of sets himself. I had a great time. I was looking forward to coming here, and it was as fun as I hoped it was going to be.”

One special thing about Zidane is that the horse also competes in the Pre-Adult Hunters with his owner, Susan Darragh.

“Susan works for me to be able support me, and Zidane, and for us to be able to go to the derbies,” Steege noted. “She imported Zidane as a two-year-old, and he is twelve now. She shows him herself in the Pre-Adult Hunters, which I do not think there are too many horses that can compete in hunter derbies and do the Pre-Adults. It keeps him on his toes. He is never sure if the jumps are going to be 4’3″ or 2’3″! I think that is pretty remarkable.”

Jennifer Bliss and Harris Hill Farm LLC’s Poker Face finished fourth with scores of 171 and 185 for a 356-point total. Peter Wylde and Dana Tourville’s Candor 15 placed fifth, also with a 356-point total, carrying over a 173 from round one and receiving 183 in round two. Scores from judging panel two broke the tie for sixth place. Louise Serio and Autumn Janesky’s Temptation rounded out the top six with scores of 173.5 and 182 for a 355 total.

Sunday’s competition concluded the 2016 Winter Equestrian Festival. Equestrian Sport Productions would like to thank everyone for another fantastic season. For full results and more information, please visit www.pbiec.com.