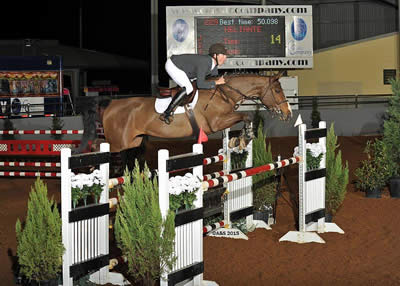 Andy Kocher and his own Heliante fly over an oxer on their way to the win in the $25,000 EMO Grand Prix.

Andy Kocher of Lake St. Louis, Missouri reigned as King of the Grand Prix over the last two weeks at the Gulf Coast Winter Classics in Pensacola, Florida.

Besides winning Week II’s $25,000 Nutrena Grand Prix and grabbing second and third place, Kocher won the $25,000 EMO Grand Prix aboard his own Heliante to close out the series. Add to that his wins in both $5,000 Horseflight Open Welcomes and it’s easy to say, Kocher was on a roll!

“This was Heliante’s first grand prix. She’s a really nice mare I just got out of Belgium,” Kocher commented. “Actually, another dealer just put her on a plane to me a little over a month ago and told me I would do well with her and he was right!” he added.

Kocher was first to go in the $25,000 EMO Grand Prix aboard Eagle Valley Partners, LLC’s C’Havinia. Four faults at the sixth fence in a time of 73.558 seconds would find them in seventh place overall. With the likes of Marylisa Leffler, Tim Maddrix and Hailey Henderson, it was anyone’s guess as to who would take home the win.

Christian Rogge of Spring, Texas was next to go and the first to go clean in a time of 74.830 seconds, well within the 82 seconds time allowed in the irons of his own Lissa Tsp.

Kocher followed him, this time riding Cuffesgrange Lux Good, owned by Oakland Ventures, LLC. The pair finished fault free in a time of 76.007 seconds and determined there would be a jump off.

Marylisa Leffler of Brookville, Maryland and Rolling Acres’ Carlot was next to go and turned in a four fault round in 74.519 seconds which would place them in eighth place overall.

Heliante, owned and ridden by Kocher, was next to go and turned in a clean first round effort in a time of 73.402 seconds, adding another horse and rider team to the jump off roster.

Kocher mounted up again, this time in the irons of BTS Entertainment and Sales’ Ufarno. Four faults at the fence six combination in a time of 69.249 seconds would see them finish as the fastest four fault round in fifth place.

Tim Maddrix of Birmingham, Alabama, winner of both the National and International Hunter Derbies Week II, was next to go under the covered arena in the irons of Baily Martin’s Contador De Bornival Z. The pair had eight jump faults in a time of 76.859 seconds which would see them finish in tenth place overall.

Arion Legends, LLC’s Cantu 5, also ridden by Kocher, turned in a clean round with 77.820 seconds and added themselves to the jump off roster.

Hailey Henderson of Lafayette, Louisiana, in the irons of her own Zine Dine, finished with four faults at fence ten and a time of 73.104 seconds which would leave them in sixth place overall.

Kocher was last to go in the irons of Tiny Tim, owned by Emanuel Andrade, and turned in a four fault round in a time of 77.807 seconds which would see them finish in ninth place overall.

The jump off course was set with a time allowed of 56 seconds. Rogge and his own Lissa Tsp was first to go and finished clean and set the time to beat at 52.934 seconds. Kocher and Oakland Ventures, LLC’s Cuffegrange Lux Good followed with a clean round in a time of 50.098 seconds, taking the lead. Challenging his own time, Kocher returned with his own Heliante and turned in the winning clean round in a time of 48.678 seconds.

“I was really excited about winning the $25,000 EMO Grand Prix,” said Kocher. “I got killed in the donkey races the night before. I ran last!” he exclaimed. “I guess donkeys need different signals than horses,” he laughed.

“We had a good circuit here in Pensacola and I’m hoping my luck continues this winter,” he added. Kocher is planning on showing in each grand prix at the Gulf Coast Winter Classics in Gulfport which start on February 4th. “I’m going to leave the southeast with a big sack of cash,” said Kocher.

For more results on this class, please visit horseshowsonline.com.