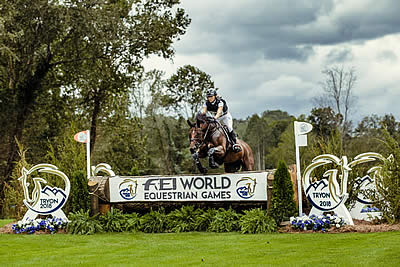 Germany’s Ingrid Klimke kept her nerve to grab the lead as the Irish and French lit up a dramatic, adrenaline-fuelled day of eventing at the FEI World Equestrian Games™ Tryon 2018 (WEG).

Klimke, second overnight, made it look easy as she and mount SAP Hale Bob OLD flew round the 5,700m course in 10:00 minutes, bang on the optimal time. Great Britain’s Rosalind Canter kept a relatively familiar look to the leaderboard as she and Allstar B improved from third to second, following a swift, flawless round. But the real drama came behind.

Ireland have never won a team medal at the WEG, but with two riders sitting in the top seven, that could all be about to change. Sarah Ennis (IRL) leads the way with a score of 26.30 points, enough to put her into the bronze medal position with just the show jumping to come.

“I can’t believe we are actually here,” Ennis said, with Ireland sitting second in the team standings. “He (Horseware Stellor Rebound) finds it very easy and he’s very fast. I think there might be a few drinks tonight.”

Two Frenchmen, Lieutenant Colonel Thibaut Vallette and Astier Nicolas, sit fourth and fifth behind Ennis, hauling the French up into third overall. Great Britain currently look favourites for team gold, thanks in no small part to another fine performance from Canter.

“It was quite a rollercoaster out there,” said the 32-year-old. “I knew I had to be fast and that’s out of my comfort zone.”

Fast she was, but Klimke, carrying a penalty score of just 23.30 over from the dressage stage, was untouchable on the fiery SAP Hale Bob OLD.

“He was just so full of himself today,” the European 2017 individual gold medallist said. “He was very fast in the beginning; he really wanted to run.”

Not so for teammate Julia Krajewski, runaway leader after the dressage. The devastated 29-year-old and her mount Chipmunk FRH ran into problems at the difficult fence 14 and faded to 47th overall.

As a result, Germany slipped back to sixth in the team standings, the final qualification place for the Tokyo 2020 Olympic Games. Disappointing days for the likes of Blyth Tait, and Boyd Martin saw New Zealand and the USA drop out of that all-important top six.

Due to the bad weather expected in Tryon, competition will conclude on Monday, something leader Klimke is certainly relaxed about.

“I think the horses will like it,” she said. “Another day of vacation.”