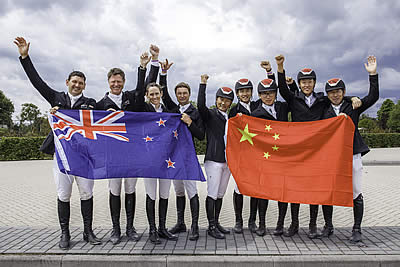 New Zealand and the People’s Republic of China are both on their way to the Tokyo 2020 Olympic Games after clinching the top two places at the Olympic Group G team Jumping qualifier staged in Valkenswaard, The Netherlands.

The experienced Kiwi side was always tipped to come out on top, and they lived up to expectations. But as four-time Olympian Bruce Goodin pointed out they were taking nothing for granted.

“These qualifiers are tricky things; it’s all or nothing; you can come in with good form and still miss out – you have to get it right on the day!” said the man who is based in Skåne, Sweden.

And it was clearly no walk-in-the-park for any of the six nations vying for those two coveted slots, Helena Stormanns’ winning side of Goodin, Samantha McIntosh, Tom Tarver-Priebe, and Daniel Meech posting a final scoreline of 17 faults, although they didn’t have to call up anchorman Meech in the second round.

China’s Yaofeng Li, You Zhang, Zhenqiang Li, and Tongyan Liu rounded up their score to 47 faults for second place while Hong Kong’s Patrick Lam, Clarissa Lyra, Jacqueline Lai, and Kenneth Cheng finished third with 58. The only other team to finish was Chinese Taipei whose Tina Lu, Isheau Wong, Po-Hsiang Huang, and Jasmine Chen put 62 faults on the board. The three-member sides from The Philippines and the Republic of Korea did not complete.

“It’s a huge thrill for us – we missed out on a team place at the last two Games but we came here with three experienced riders, and one newcomer in Tom who had never been on team before at this level, so for him to come out with a clear in the second round was really something! I’m very proud of all our team and very thankful to Helena our Chef d’Equipe!” Goodin said.

The Kiwis were already well out in front after the first round, counting single errors from both Goodin (49) with Backatorps Danny V and Samantha McIntosh (43) riding Check In, and the five collected by Daniel Meech (45) and his mare Fine. The relatively unknown Tarver-Priebe (34) and Popeye racked up a 12-fault tally for the first-round discard, but their foot-perfect second run secured the Tokyo ticket and ensured Meech didn’t have to return to the ring. The only addition to the New Zealand scoreline were the four faults picked up by Goodin and his 11-year-old gelding who clipped the final fence second time out.

McIntosh was clear at her second attempt, and the lady who was flying the Bulgarian flag on her only previous Olympic outing in Sydney (AUS) in 2000 is delighted to be back representing her native country once again. “These guys are my friends and we work great as a team. I was young (24) when competing in Sydney and I never managed to have the right horse at the right time for any of the other Games until now. Check In has been a fantastic horse for me. It didn’t start easy, but we have a great partnership now!” she pointed out.

“Things come easier when you’re younger,” said Meech. “I competed in Atlanta (1996) and finished 12th in Sydney (2000) but there’s been a big gap and I really appreciate it much more now than I did then! There’s nothing like the Olympic Games; absolutely nothing compares; this qualification is such a relief and it’s great to get the Olympic buzz going again!” added the German-based rider.

“The Chinese team is going to the Olympics again as a team; it means we have improved a lot in the last 10 years and we will keep improving. I think this will motivate more and more people to join this amazing sport. We’ve been preparing for this for over a year,” said 21-year-old Yaofeng Li who finished individually seventh for the host nation at the Youth Olympic Games in Nanjing, China in 2014.

And there was one extra-proud father at Valkenswaard, Yaofeng’s father Zhenqiang Li (51), who posted just six faults over two rounds to help seal that second Olympic slot. “For a dozen years my son and I have trained together, competed together, and now it has proved to be a worthwhile trip – I am very excited! Beijing 2008 was the first Olympic Games for me and the Chinese riders, so it is a lifelong memory for me. And it is even more meaningful because last time we got through as host country but this time we competed against five other teams in Group G and earned the qualification. It proves that equestrian sport in China has developed dramatically in recent years!” he pointed out.

Team China captain and anchorman, Tongyan Liu (51), congratulated his side. “This is only the first step in a long journey – there is still a gap between us and the world’s best riders, but I hope the young Chinese riders will go further, and even better!” he said.

One of those young hopefuls is 18-year-old You Zhang who steered his 10-year-old gelding Caesar through two eight-fault rounds. As he rightly pointed out, this was a watershed moment for his country in the history of this sport. “I feel great to achieve this result with my team; it’s the first time that China has been properly qualified as a team, so I feel happy for myself and the Chinese Team. I’m very excited about going to Tokyo, really looking forward to it, and we will try to do good over there!” he said.