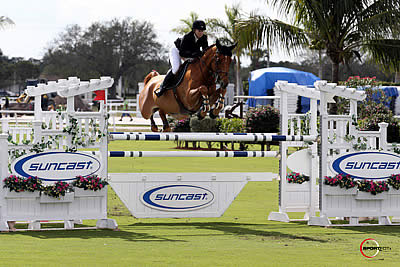 Wellington, FL – February 21, 2013 – Week seven of the 2013 FTI Consulting Winter Equestrian Festival, sponsored by Hermès, continued on Thursday in Wellington, FL, with the $30,000 Ruby et Violette WEF Challenge Cup Round 7 featured on the grass derby field at The Stadium at the Palm Beach International Equestrian Center (PBIEC). American duo Kirsten Coe and Ilan Ferder’s Baronez were the winners of the class with the only double clear round in a jump-off of five starters. Darragh Kenny (IRL) and Hays Investment Corporation’s Any Given Sunday finished second; Meagan Nusz (USA) and Amalaya Investments’ Dynamo were third.

Additional show jumping competition, including the $25,000 Suncast 1.50m Championship Jumper Classic (Saturday, 1 p.m.) and the $50,000 Hermès Jumper Derby (Sunday, 3 p.m.), will also be held on the grass derby field at The Stadium at PBIEC.

Richard Jeffery, of Bournemouth, England, is the course designer on the derby field for the week. On Thursday afternoon, Jeffery set the track for 44 entries in the seventh edition of the Ruby et Violette WEF Challenge Cup Series. Five jumped the first round course without fault to advance to the jump-off, and Kirsten Coe and Baronez were the only pair to also clear the short course. Their faultless jump-off round in 43.303 seconds was the winning round.

Darragh Kenny and Any Given Sunday finished second with their four-fault round in 40.469 seconds. Meagan Nusz and Dynamo had four faults in 41.658 seconds to place third. Shane Sweetnam (IRL) and Spy Coast Farm, LLC’s Diktator van de Boslandhoeve had one rail down in 43.648 seconds to finish fourth. Mario Gamboa (COL) placed fifth aboard Stansky’s Mission Farms, Inc.’s Unico with four faults in 44.963 seconds.

In addition to winning $9,000 in prize money for her win in Thursday’s class, Kirsten Coe was also awarded an impressive $18,000 in extra bonus money for the SSG “Go Clean for the Green” promotion. A $3,000 bonus is offered each week if the winning rider of the Challenge Cup class is wearing the SSG ‘Digital’ Riding Gloves in all rounds of competition with the SSG logo clearly visible. The bonus went unclaimed for five weeks straight until Thursday, when Coe was presented with six-$3,000 checks following her win. The rider, originally from California but now a Florida resident, had not originally planned to show this week but definitely made the ride worth it.

She was very pleased with the performance of Baronez, a twelve-year-old chestnut Belgian Warmblood mare by Heartbreaker, who she has had for two years.

“She was great today,” Coe smiled. “It wasn’t my original plan to show this week, but last week she was great in the WEF and then she jumped her first night class and I thought she was a little nervous and tense. She didn’t really jump that great, so I decided to change my plan and jump again today and it worked out well.”

“I knew she is really good on the grass; that’s why it kind of benefitted me,” Coe continued. “She jumps really well at Spruce Meadows and any of the venues with grass, so I knew it would be fine for her to walk right out here and show. She is really happy on the grass and I think it is a nice change of venue. The field is wonderful and it is nice that they use it; they should use it more.”

Describing Baronez, Coe stated, “She is very sensitive for such a big mare. She is your typical chestnut mare. She is quite opinionated, she tries to kick you, but she is a real fighter and she is really talented.”

Nusz, Gamboa and Kenny went before Coe in the jump-off and all had rails down, so the strategy was obviously to jump clear, but she knew that Sweetnam was last to go and time was still a factor.

“I knew Meagan’s horse is fast,” Coe detailed. “It has a very big stride and I have seen it show a lot at Spruce, so when I went in and I saw Darragh have one rail before me, I thought, ‘Just be prompt and clean.’ At least if I went clean or Shane went clean, I was first or second.”

On the question of where this win ranks in her career, she smiled, “It’s a good one. It was a nice win and the bonus was nice. I think the promotion is amazing and I think I was lucky that no one has won it in the last six weeks.”

Holly Orlando and Kelley Farmer took home an astounding majority of championship titles awarded for the first half of the week. Three of the four titles among them were mounts from Larry Glefke’s Lane Change Farm. Not surprisingly, the unstoppable pairing of Quotable and Holly Orlando took home tricolor honors in both Regular Conformation and Green Conformation Hunter divisions, which are sponsored by the Sanctuary.

Orlando and Quotable, a seven-year-old Dutch Warmblood gelding owned by Glefke and Dr. and Mrs. Kenneth Garber, were first and second over fences and first under saddle to earn Sanctuary Regular Conformation Hunter division championship honors. Reserve champion went to another Lane Change Farm pairing, Kelley Farmer and Jessica Stitt’s Taken. Farmer and Taken were second, first and first over fences and fifth under saddle.

Quotable and Orlando are no stranger to the winner’s circle at the FTI WEF, but Orlando described this week’s victory as especially significant. “It’s always nice to know you didn’t peak too early. When World Hunter Rider week comes around, you want to know you’ve still got it,” Orlando stated.

“Quotable is so consistent and we’re thrilled with him,” Orlando continued. “I get in trouble daily for spoiling him with treats, but he deserves it! He tries to win every time he goes in the ring, and it’s so nice to have a horse like that.”

Orlando also expressed excitement for Farmer’s success aboard several other Lane Change Farm horses. “Kelley and I are not competitive with each other; we’re a team,” Orlando emphasized.

Farmer, an integral part of the Lane Change team, brought home two championship titles of her own in addition to the reserve with Taken. Farmer took the Equine Tack & Nutritionals First Year Green Hunter division with Mythical, also owned by Glefke and the Garbers. Farmer and the nine-year-old Warmblood gelding were fourth, second and first over fences. Reserve champion honors went to Danielle Baran’s Say When, ridden by Christopher Payne. The pair was fifth and first over fences.

“Mythical is easily one of my favorite horses,” Glefke stated. “He jumps in perfect style. He’s got a wonderful attitude about life. He stays on one rhythm and he has a brilliant jump.”

Farmer also had nothing but praise for Mythical. “He’s not afraid of anything. The bigger, the harder, the scarier the course, the better he is. He just wants to win. He’s a fantastic animal and he was perfect today,” Farmer commented.

“This is a big, prestigious week. To be on a First Year champion this week means a lot. You have to not only have a good horse, but all the chips have to fall into place. Everything has to work,” Farmer continued.

Farmer’s victory on Mythical was her third horse to qualify for Saturday’s Hunter Spectacular competition, leaving her with the tough decision of which horse to leave in the barn Saturday night. Ultimately, she decided on her veteran ride, Taken, and Mythical.

“It’s a great class and it’s an honor to qualify. It’s a hard decision to make, but I’m lucky enough to make it. There’s a barn full of animals that we are lucky to have,” Farmer explained.

Farmer chose Taken based on his experience under the lights during previous years competing in Hunter Spectacular classes. When asked what stood out about Mythical, Farmer deadpanned: “Everything. He’s a special horse and he deserves to be in it.”

Selma Garber, part owner of both Quotable and Mythical, declared the 2013 FTI WEF the “circuit of a lifetime” thanks to her wildly successful geldings. “It’s a dream come true to have them both qualified for Saturday night. I’ve got quite a team that worked with these animals – riders, trainers, grooms, and of the course the animals themselves. It’s a very lucky formula,” Garber continued.

“Seldom does a plan come together quite like this,” Glefke echoed. “At the beginning of the week, I told [Orlando and Farmer], ‘Girls if you could get Quotable, Taken and Mythical in there [on Saturday night], it would make my week.”

Farmer’s second championship ride was with At One’s Word in the Equine Tack & Nutritionals Second Year Green Hunter division. Farmer and the eight-year-old Hanoverian gelding owned by Woodland Way, Inc., were first and fourth over fences and third under saddle for the division. Reserve championship honors went to Lapis, also ridden by Orlando and owned by Missy Luczak-Smith. Lapis and Orlando were fourth under saddle and second in two over fences rounds.

At One’s Word is another Lane Change Farm alumni, and Farmer is pleased to be able to continue to ride such a competitive horse. “I’ve gotten the pleasure of still getting to ride him since he was sold. He’s lovely. He’s got a big stride, he’s scopey, and he’s a brave horse. He’s not spooky at all. He walked right into the International Ring and won his first class,” Farmer stated.

Scott Stewart also enjoyed a championship victory aboard Dedication in the Gold Coast Feeds High Performance Working Hunter division. The eight-year-old Holsteiner gelding, owned by Dr. Betsee Parker, was first, sixth and second place over fences in addition to winning the under saddle class with Stewart in the irons. Liza Boyd and her own Brunello were reserve champions for the division, finishing fourth, first and first over fences.

Stewart describes Dedication as one of his most talented rides. “He’s an amazing jumper. He’s probably one of the best hunters I’ve ever had. He’s one of the few horses that is a beautiful mover and really athletic. He’s the most athletic hunter I’ve seen in a long time,” Stewart commented.

Parker echoed Stewart’s sentiments about Dedication in addition to describing Stewart as the horse’s perfect match. “You can feel that Scott genuinely loves this horse from the bottom of his heart. Dedication is as much of a perfectionist and an athlete as Scott, and we all know Scott is the consummate perfectionist,” Parker stated.

Thursday’s competition concluded with the Performance Hunter divisions, which will be included in tomorrow’s press release.