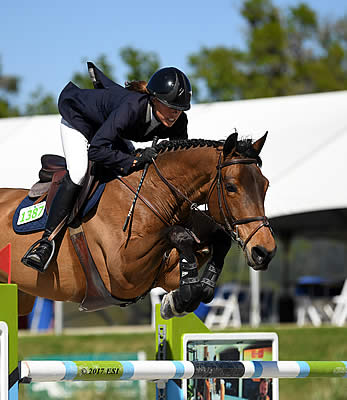 This week is Great American Million week at HITS Ocala, where the best of the best will travel from near and far to compete for the sport’s richest prize purse in the Ocala Horse Properties Stadium.

Last Sunday, there was still plenty of competition to witness in the $100,000 Sullivan GMC Truck Grand Prix. Canadian equestrian Kim Farlinger took home the win in a thrilling 11-horse jump-off aboard Charming Force B, owned by her own Kim Farlinger Stables Ltd.

Farlinger has ranked consistently among the top finishers at HITS Ocala this season, and each week, she and Charming Force B have climbed up the ranks to snag their blue-ribbon finish. They swooped in for the victory with a time of 40.430, a full two seconds ahead of the field of their peers.

Second place went to Harold Chopping of Southern Pines, North Carolina. Chopping rode Basje, owned by Kendra Bullington. They are no strangers to the ribbons at HITS Ocala, having won several Grand Prix during the HITS Holiday Series. They stopped the clock fault-free in 42.391 for the second-place prize.

Four more would go double clear to seal their spot in the top ribbons, including a rare tie between two riders who clocked in at the same time down to thousandths of a second: Mattias Tromp and Candice King. Tromp rode Avon, owned by Swede Ventures, LLC, and King piloted Calisto 26, owned by Ross Smith. Their time of 42.543 was just two-tenths of a second behind Chopping for the third-place tie up.

Hometown hero Aaron Vale garnered the final spot in the top five with Bonzini S, owned by Thinkslikeahorse. Their cool, clear round of 42.949 earned them the pink ribbon for the fifth-place prize.