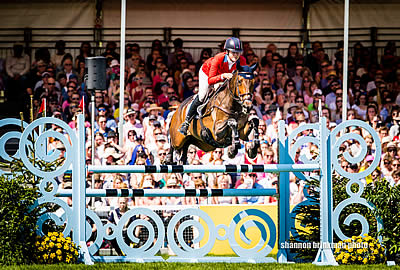 Badminton, England – Land Rover/USEF Eventing Grant recipient Lauren Kieffer and Veronica became the first American combination to finish in the top 10 of the Mitsubishi Motors Badminton Horse Trials on Sunday in more than a decade. 2007 was the last time a U.S. combination broke the top 10 barrier, when Kim Severson (Charlottesville, Va.) and Winsome Adante finished third.

Placing ninth overall, Kieffer (The Plains, Va.) and the 16-year-old Dutch Warmblood mare owned by Team Rebecca, LLC contested their seventh four-star event together, showing their experience from start to finish. Ending on a score of 38.6, the pair greatly improved their position from 2017, when they finished 17th overall. This year, Kieffer and Veronica held a spot consistently in the top 10 through all three phases of competition.

After their trip down the centerline, Kieffer and Veronica sat tied for the 10th position on a score of 25.0 after dressage. With the goal of improving upon their run from 2017, the combination headed into the cross-country phase. They jumped a clean course, but added some time penalties, boosting their overall position to seventh and a score of 34.6.

“I am absolutely ecstatic with [Veronica] – she is such an amazing little mare,” said Kieffer after their trip around the course designed by Eric Winter. “I came out and had a bit of a chip on my shoulder from last year and just wanted to prove that we could attack the course. [Veronica] was happy to do it.”

The show jumping phase saw the combination drop a single rail, slipping to ninth overall, but laying claim to a top 10 finish.

“[Veronica] jumped super,” said Kieffer. “We don’t get to practice jumping on grass very often, but she really jumped well out of it. Sometimes at the end of a four-star they are pretty haggard feeling, and she really felt great. She felt like she does every day, so I really couldn’t be more thrilled with how she came out this weekend.”