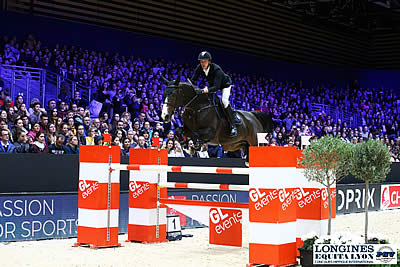 Kevin Staut is clearly one of the fans’ favourite riders in Lyon. So, when he completed his second clear round in a record time of 36”15 with Urhelia Lutterbach, during a spectacular jump-off with 16 of the best riders in the world, all the spectators in the grandstands around the main arena stood to applaud him. Riding at the end of the class, neither the current world number one Steve Guerdat nor the German champion Marcus Ehning managed to dislodge the Frenchman from the top step of the podium for this Longines Grand Prix at 1.60m.

This was Kevin Staut’s first win in a 5* Grand Prix with Urhelia Lutterbach, the former horse of Grégory Cottard. “It’s a wonderful story. Gregory used to ride the horse and had achieved some great things with her. I started riding her back in June. I felt comfortable riding her right from the beginning. She jumped a lot of clear rounds. Gregory always told me that she jumped well indoors, that she was more focused. She certainly proved it tonight,” said the Frenchman, clearly moved and delighted with the win.

France even managed a one-two in this class. Alexis Deroubaix and Timon d’Aure – regulars in the French team – managed to complete a double clear round in a time of 36”85 and took a fine second place. The Swiss European champion Martin Fuchs took third place on the podium with Silver Shine (37”42). In total, only 5 of the 16 riders in the jump-off managed to complete their second round without incurring a penalty in this Longines Grand Prix.