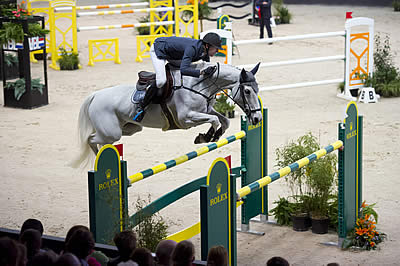 Sunday 23 March 2014: Rolex Testimonee Kevin Staut, riding his 14 year old mare Silvana HDC, today claimed victory by the narrowest of margins in the inaugural Rolex Grand Prix at the Indoor Brabant in The Netherlands. Only 0.01 seconds separated the Frenchman from Germany’s Marco Kutscher in second, with Penelope Leprovost in third place.

Course designer Louis Konikkx laid out a track which looked for power and control from the horse and rider combinations, and from a starting line-up which included 14 of the World’s Top 20 riders, only five responded to his challenge by going clear and into the jump-off. The capacity crowd of 8,500 enthralled spectators were then given a demonstration of why victory in the sport of Show Jumping can come down to the wire.

Penelope Leprovost, riding Nice Stephanie, was first to go in the jump-off, and went clear for the second time in the competition; her time of 43.11 seconds set the benchmark. Kevin Staut was 2nd into the arena, and a wry smile spread across Penelope’s face as he bettered her time by 0.15 seconds. Great Britain’s Joe Clee and Bertram Allen from Ireland both dropped poles, so it was all down to Marco Kutscher and Cornet’s Cristallo, who was the final rider into the ring.

Marco was fast around the course, and time seemed to stand still after he cleared the final Rolex obstacle. However, as Marco’s time appeared on the big screen Kevin realised victory was his and a huge smile and a raised arm acknowledged the cheers of celebration from the large crowd.

Now in its 47th year, Indoor Brabant is much loved by the top riders and Dutch equestrian fans alike.

Commenting on the show, Kevin said, “Indoor Brabant has history and we need shows like this one, Aachen, Spruce Meadows and Geneva. The riders feel it and want to come back to these shows. When you go into a ring like Indoor Brabant, you can feel the history and the crowds stay late every night to watch the top sport that this show delivers.”

2014 is the first year of a new partnership between Indoor Brabant and Rolex, and strengthens the show’s position as one of the top indoor competitions in the world.

Show president Gerrit-Jan Swinkels said, “Sport has been the big winner over the last few days, and that has always been the intention of this show. We thank our sponsors and particularly Rolex, who have given us the opportunity to make things extra special this year and into the future.”

Rolex is a partner to some of the greatest equestrian shows in the world, including the three Majors; CHIO Aachen, the Spruce Meadows Masters and CHI Geneva. These great shows also form the Rolex Grand Slam of Show Jumping which is the first global initiative to reward the outstanding rider who wins the Grand Prix at each show in succession.