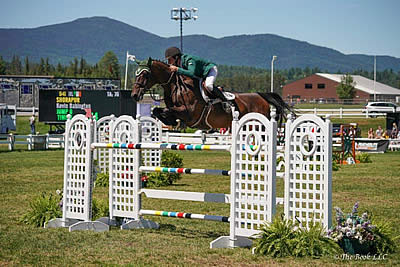 Kevin Babington and Shorapur (Photo courtesy of The Book LLC)

Lake Placid, NY (July 12, 2019) – Olympian Kevin Babington took peak performance to a new level this Sunday in Lake Placid, where he achieved a rare Grand Prix hat trick. In what he described as a major highlight of his career, the Irishman finished first, second, and third on three of his horses for a clean sweep of the $100,000 Great American Insurance Group Grand Prix. Babington piloted Shorapur (33.212 seconds), Super Chilled (35.436 seconds), and Mark Q (38.430 seconds) to the top three spots out of 64 entries, marking his fourth Grand Prix win in Lake Placid.

“I’ve been pinching myself ever since my last round. I never would have foreseen something like this happening,” said Babington. “My horses have been in really good form and I was hoping for a couple of good rounds, but if someone had wanted to bet me that I’d be one-two-three, I never would have taken the bet. I think I had the luck of the Irish with me. Shorapur had a really hard rub at the third-to-last fence of the first round and easily could have had it down. She’s the fastest of my three horses and normally I’d prefer to have her go last; but since she was first, I decided to go for broke and it all just played out beautifully after that.”