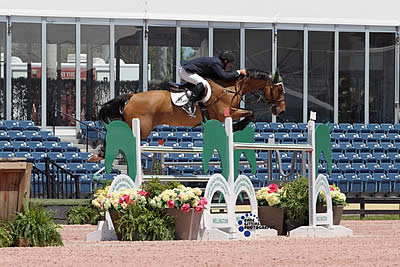 Wellington, FL – April 25, 2019 – Kevin Babington of Gwynedd Valley, PA made his mark on the $40,000 Triple Crown Nutrition Spring III Grand Prix at Palm Beach International Equestrian Center (PBIEC), piloting both his mounts Mark Q and Shorapur to a first and second place finish, respectively. Babington and his own Mark Q dashed through the short course in 35.967 seconds, while stopping the timers in 36.865 seconds aboard Shorapur, owned by Shorapur, LLC. Luiz Francisco de Azevedo and so What HP Z took third place after completing the jump-off course in 37.085 seconds.

Babington and Mark Q have a stored partnership together, collecting wins across the country at the Grand Prix level. The pair navigated the track, built by Richard Jeffery, well, which ensured a solid performance in the jump-off from the duo. A total of 12 combinations moved forward to contest the jump-off, with six pairs completing the course with a double clear effort. Over 35 total combinations attempted the first-round track, with two riders finishing on just a single time fault to keep them from advancing to the jump-off round.

“I thought the course was difficult enough and understand why [Richard] had to build it the way he did. I thought it suited Mark Q really well and he’s a very good oxer jumper. Shorapur is more of a vertical jumper because she’s super careful, but they both rode it well,” said Babington.

“I was glad the time was a little bit tight because for my horses, they’re both experienced and I was able to do a couple of inside turns that kept me inside of the time. It was tight enough and the first three jumps were a little bit difficult, but there were a few places you could make it up.”

Babington had a fantastic week with both horses, particularly with his mount Mark Q, who finished in second place in the $25,000 Palm Beach Equine Clinic Spring Grand Prix on Friday. Babington commented that he felt Mark Q jumped much better in the jump-off than in the first round on Friday and the feeling was mimicked on Sunday.

“Mark Q was second on Friday and when he came back on Friday, he jumped much better in the jump-off than he did in the first round. I knew that I could really challenge him and take some risks. I did eight strides from one to two, which was the leave-out number,” he explained. “When I was approaching the jump, he swapped leads, so I found a waiting distance and really had work for the eight and then I knew I could stay on that rhythm and everything came up just fine.”

Discussing the ride on his second mount Shorapur, Babington commented, “On Shorapur I knew the eight from one to two may be too much for her. She’s super careful at her oxers, so I stayed wide in nine and everything came up just the way I wanted it. I knew that if I added a stride down the line, I was taking a risk, but it worked for her to do the nine to the last jump and jumped it super well. I figured that if everything came up just right maybe Kent or Darragh would catch me, but all worked out well.”

Following his success at ESP Spring III, Babington will head straight to Kentucky to compete Shorapur, before gearing Mark Q back up for FEI competition in Kentucky during the month of May, with the ultimate goal of competing him at Devon in June.

“The reason I jumped Shorapur is because she’s going to do the class in Kentucky this weekend, we’re leaving tonight, so it was just a prep class for her. Mark Q did a lot at the beginning of circuit and very little at the end. He’ll do the regular FEI shows in Kentucky and then hopefully I will jump him in Devon in the Grand Prix. Shorapur will skip Devon and potentially do Upperville instead. I also have Super Chilled and we’ll just try to break it up a little bit with them to see where they will do best.”

Hardin Towell of Camden, SC found himself atop the leaderboard once again during ESP Spring III, this time aboard Hollywood Be Good, owned by Kirsten Ostling, after the pair finished ahead of the class in the $25,000 Palm Beach Equine Clinic Spring Welcome Grand Prix. The pair finished with a time of 35.683 seconds in the jump-off ahead of Kevin Babington and Mark Q, who completed the course in 36.486 seconds. Alberto Michan of Wellington, FL and El Pacho, owned by Pablo Mejia, rounded out the top three in 37.099 seconds.

The course, designed by Richard Jeffery, saw 26 entries tackle the main track, with 11 entries advancing to the jump-off. Kevin Babington piloted his two entries into the second round, while Towell also guided his two mounts successful into the short course phase as well. A total of seven combinations finished fault free.

Towell and Billy Cool, owned by Oakland Ventures, LLC, rode to the top of the $10,000 Triple Crown Nutrition Open 1.40m Stake after stopping the course timers in 37.787 seconds. Towell also piloted Corona 93, owned by Oakmont Stables, LLC, to second place with a time of 41.134 seconds, finishing nearly four seconds faster aboard his first-place mount, Billy Cool. Lorcan Gallagher of Wellington, FL and Cassandra F, owned by Southern Arches, LLC, rounded out the top three with a time of 41.444 seconds.

The class saw a total of 40 entries with eight combinations advancing to contest the jump-off track. Towell and Paul O’Shea were the only two riders with two horses in the jump-off round, as half of the advanced field completed the class with zero faults.