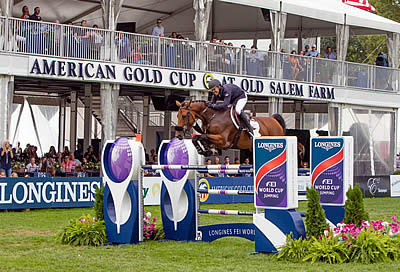 “I thought Alan Wade built a difficult course today, which I think is well suited for a class of this prestige and amount of prize money,” said Farrington. “As a World Cup Qualifier, it brings the best riders and their top horses.

“It worked out for me today, but regardless, I thought it was a great competition. I’m thrilled to finally win the American Gold Cup – I’ve never done that before and it was on my list of things to do.”

Only two riders advanced to the final round with Charlie Jacobs (USA) preceding Farrington in the jump off at the second leg of the East Coast sub-league. In an attempt to save time and to add pressure on Farrington, Jacobs unsuccessfully angled a wide oxer in the final round. The resulting rail left the door open for Farrington to take the win.

“That’s actually what I hate to do – go at a normal speed,” said Farrington about his jump-off strategy. “But if I had one down, I could still catch [Jacobs’ time] at the end.”

Slow and steady was the winning approach as Farrington demonstrated constraint in his ride – a difficult approach for the normally speed-driven jump off competitor. But Farrington still managed to end with a flourish when his mount, the 10-year-old Belgian Warmblood mare (Kashmir van Schuttershof x Indoctro), came to an abrupt halt after crossing the timers, forcing Farrington out of the tack and onto his feet. Not one to waste the opportunity, Farrington stood holding Gazelle and took a bow to the crowd’s applause.

The course design challenged the riders and horses with solid jumps and a tight time allowed, but in the eyes of Farrington, team silver medalist at the 2016 Rio Olympics, a third, major variable in the grand prix was the natural terrain.

“The field isn’t totally level, and I think that automatically makes any course more difficult to ride,” he said. “Oxers going uphill are going to be wider and ride much bigger than they’re set, and a vertical coming downhill is going to naturally draw a horse closer and throw them off balance so that’s already a difficult factor we don’t see every day.”

It’s this type of insight that makes Farrington as much a sought-after trainer as he is a rider. And he applies the same, careful approach to assessing a course as he does to competition selection for his horses.

“This year, especially with it being in the United States, I would like to go [to the FEI World Cup™ Final] if I feel like I have a horse that’s on form at that time. I’ve been to the [FEI World Cup™ Final] a few times, and I really only want to go if I’m going to be a contender. I’d like to plan on going right now.

“The Longines FEI World Cup™ Final is a particular type of competition, in a small, indoor arena, so you need an indoor specialist and [the horse has] to hold up over five rounds, which is also a lot of jumping so I wouldn’t necessarily take [Olympic mount] Voyeur there. He’s a little bit of an older horse and he’s jumped multiple championships already for me. I think that would be a big ask of him at this point in his career. But if one of my younger ones is ready in my eyes to go, then I’ll take a swing at it.”

“I tend not to watch too many,” Farrington said about his approach to competition. “I watch a couple riders and a few lines for reference. But watching a million horses doesn’t help for me. I’m better when I ride my own plan and do my own thing with my horses and I think that’s why in Nations Cup settings, I’m better to go in first. That plays more to my strengths.”

And as much as he’s aware of his own strengths, he also structures courses to play to his horses’ strengths. For his winning horse, he knew he could call on her carefulness to ride a clear round.

“I think in any class, I try to play to my hose’s strengths, regardless of what everyone else is doing, and I try to work within parameters for my own horse and do what is going to work best for my own horse,” he added. “If that means adding a stride, then I’ll do that and make up the time someplace else.”

“The horse is typical of what I try to buy: a very careful horse,” Farrington said. “I would rather buy an extremely careful horse and have to manage confidence. I think that’s really the modern sport today. That’s what you need in a young horse. They can tend to be a bit spooky and a bit suspicious and it takes a little time to gain confidence in the rider, but in the end, that’s how you get a top horse.”

The first horse-and-rider pair to go clear in the first round, Jacobs and Cassinja S, proved the possibilities for a fault-free performance.

“You have to get moving out there, for sure, because the time allowed is tight,” he said, following his successful, first round. “I was fortunate to draw eighth in the order so I got to watch riders and still have fresh turf – it tends to get deep here [with the footing].”

But his favorable positioning for the first round quickly turned to a drawback in the jump off when only he and current World No. 2 Farrington were the only riders left competing.

“In the jump off, I was first to go, which was at a disadvantage,” Jacobs said. “When you have the World No. 2 behind you, you have to go fast. I made a rider’s error when I turned her in the air [over the oxer] before she cleared the back and forced her to have the rail behind. It’s something I hope to fix in the future.”

“There’s no question that Cassinja is my top horse right now,” he said. “She’s a 10-year-old, Zweibrücker mare that I’ve had for three years. I took her to Gothenburg as my second horse and jumped her in the Easter Sunday consolation class. She was quite good, but it seems like this spring, she’s come out with guns a-blazing. She’s very talented and very powerful. She’s a big mare with a lot of heart.”

Ireland’s Alan Wade designed the courses to test scope and accuracy, which ultimately forced faults from 38 riders in a starting list of 40 entries. While rails fell throughout the 13-obstacle, first round track, a majority came through an early triple combination of an oxer to a vertical to an oxer in two strides to a one stride.

Riders also struggled with the liverpool, set with yellow poles, that rode downhill to the double combination. Additionally, a rollback turn to a wide oxer at fence 10 that led into a tight, four strides to a careful vertical at fence 11 could claim responsibility for multiple faults.

Current World No. 4 and fellow Olympic medallist, McLain Ward (USA), nearly recorded a first round clear aboard HH Carlos Z, jumping through the difficult obstacles until the penultimate, skinny vertical. With the slightest rub from the horse’s belly, the rail fell.

“Actually, I think this was the best grand prix that Carlos has ever jumped,” Ward said, after his round. “It was difficult, but it should be. Everything came off the way I wanted. He had a very light touch and sometimes fortune doesn’t go your way.

“Most successful riders have the worker bees in their strings, and Carlos is head of that category for me. He can do any class at a show, and right now, he has to carry a lot of weight with Azur having a rest [following the 2016 Rio Olympics].

“I realized the course was quite careful today. The jumps came up just the way I wanted. It was just a bit of bad luck. The skinny [jump] is always a bit of a bogey fence. But, absolutely, Omaha is on our radar. When we have a horse like Azur, [the Longines FEI World Cup™ Final] is definitely on our radar.”

Ward finished with the fastest, four-fault score to place fifth, while Lauren Tisbo (USA) and Laura Kraut (USA) finished in third and fourth, respectively, with a single time fault each.

“It’s a young horse I have,” said Tisbo. “I just got him in the middle of February so this was a big step up for him so I’m very happy with his round today.”

Held over five days at Old Salem Farm, the American Gold Cup brings together a diverse crowd of elite equestrian athletes, discerning horse owners, excited fans and young hopefuls, eager to watch their idols. In addition to the competition ring, the international show jumping event features high-end shopping located along boutique row. From top-notch equestrian tack and equipment to fashion, jewelry, antiques, art and much more, the scenic outdoor boutiques offer the perfect opportunity to shop during breaks from the competition action.

Old Salem Farm, located an hour north of New York City, boasts a state-of-the-art stabling facility, a historic and pristine grass grand prix field and outstanding competition and schooling arenas, all of which are surrounded by one of the world’s most charming and picturesque venue settings. For the past four years, the North American Riders Group (NARG) has recognized the Old Salem Farm competitions on their NARG Top 25 List. For more information on Old Salem Farm, including its yearlong competition schedule, prize lists, clinics, boarding, lessons and training, visit www.oldsalemfarm.net.

For those unable to attend the NAL events, tune in to live action of all fourteen of the Longines FEI World Cup™ Jumping North American League qualifiers on FEI TV, the FEI’s official video platform: www.feitv.org. The additional FEI classes at these competitions will be available to view via livestream on the FEI’s YouTube channel. Visit www.youtube.com/user/feichannel to view the full details on the livestream.

The new league was launched by Beezie Madden, the most decorated US female equestrian athlete of all time, American Gold Cup winner and FEI Solidarity Ambassador Jessica Springsteen, and Hannah Selleck, team and individual gold medalist at young rider level and one of the sport’s up-and-coming stars. Full launch release here: https://goo.gl/kCIsyW