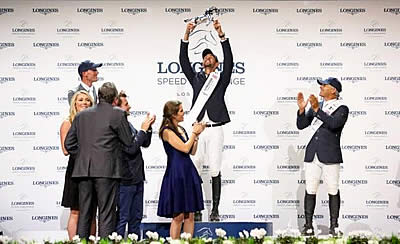 LOS ANGELES (Oct. 1, 2016) – Day two of the Longines Masters of Los Angeles was nothing short of action-packed as Nayel Nassar and Lordan finished on top after besting the field of competitors in the Longines Speed Challenge. The duo raced against the clock and finished with an impressive time of 63.47 seconds. Kevin Staut and Samuel Parot rounded out the winner’s podium at second and third place with times of 63.90 and 65.18, respectively. Notable attendees who witnessed one of the fastest competitions in equestrian sports included Kaley Cuoco and Karl Kook, Nick Bateman, Rocky Barnes, Johnny and Laeticia Hallyday, Guillaume Canet and James Caan.

Unique to the Longines Masters Series, the Longines Speed Challenge emphasizes the swiftness of the horses as each fault is only penalized by 2 seconds as opposed to the standard 4. With a fallen rail meaning a lesser consequence, riders and their horses focus on getting through the course as fast as possible.

Longines, the Title Partner and Official Timekeeper of the event, facilitated a conversation between elite equestrian and daughter of former Mayor Michael Bloomberg, Georgina Bloomberg, and reigning Olympic slalom gold medal winner Mikaela Shiffrin. The two athletes discussed the importance of timekeeping and precision in show jumping and alpine skiing. Later, Shiffrin joined Bloomberg for a traditional walking of the course to learn how the equestrian athlete assesses and prepares for the exact spacing between and height of the jumps ahead of a class.

In addition to a weekend of world-class equestrian competition, guests of the Longines Masters of Los Angeles were also treated to the thrill of high-speed indoor polo when the La Martina Polo Exhibition took the ring. Hosted by La Martina, a leader in developing new high-tech equipment for the sport of Polo, with support from the Santa Barbara Polo Club, the fast pace and physical contact of the game, the strength and maneuverability of the horses, and the skill and accuracy of the players, provided an enthralling spectacle for all Longines Masters fans.

Also on Friday at the Longines Masters of Los Angeles, Santi Serra returned for an encore performance with his Sercam Show, demonstrating the beauty and grace of the horses as well as the bond and trust that they’ve cultivated. Throughout the day, guests were treated to live musical performances by the Pendleton Sisters, DJ Jeremie, and Reverend Tall Tree.