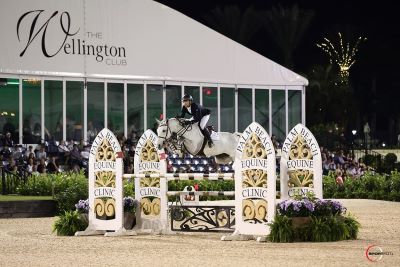 The third week of the 2023 Winter Equestrian Festival (WEF) saw national level jumper competition peak on Saturday night during the $50,000 Palm Beach Equine Clinic Grand Prix. WEF 2, presented by Florida Coast Equipment, went under the lights at Wellington International for a win that went to Kent Farrington (USA) aboard the rising star, Greya.

“It’s [Greya’s] first time jumping under the lights,” explained Farrington. “So, I tried to just work out of her normal gallop which is already pretty quick. Luckily, it worked out tonight and I thought she was incredible.”

The 2023 WEF season is an exciting one for Farrington’s team as he looks forward to introducing his younger string of mounts to top international competition at the venue.

“The last year has been a rebuilding time for my string as some of my main horses are winding down their international careers,” he continued. “It’s time for the young ones to step up; I have a group of horses – the oldest being ten – that are starting to jump in the international scene and I’m excited to see what happens with each of them.”

The Voltaire Design Large Junior Hunter 3’6” 16-17 highlighted hunter action in the Rost Arena on Saturday. Tri-color honors went to Amira Kettaneh and Corras, a 2014 Latvian Warmblood gelding by Corrwiko and owned by Robert Ruckh. The reserve champion ribbon was presented to Carlee McCutcheon and Casimir, owned by Anne Glunk.

Kettaneh first sat on Corras the day before earning a championship in their first outing together. Their performances were highlighted by two wins over fences and a high score of 89. “I got this ride yesterday which was very exciting and I’m very grateful for this opportunity.”