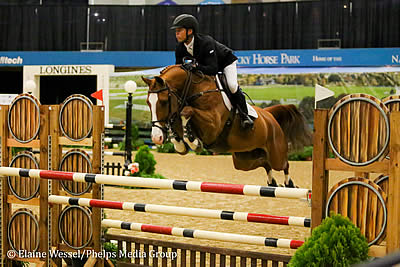 Lexington, Ky. – Nov. 1, 2018 – The 2018 National Horse Show returned to the Kentucky Horse Park on Thursday with a series of upper-level show jumping competitions capped by the $135,000 International Jumper Classic CSI4*, attracting some of the best horses and athletes from the United States and beyond. Earning the largest share of the day’s purse as well as the Walter B. Devereux Memorial Challenge Trophy, Kent Farrington (USA) and Creedance captured the victory in the evening’s feature event, while Molly Ashe Cawley (USA) and Picobello Choppin PC also solidified themselves as one of the day’s champions by outrunning the pack in the $35,000 Palm Beach Masters Series International Open Jumpers Speed CSI4*.

With the class serving as a prerequisite to qualify for Saturday’s $250,000 Longines FEI Jumping World Cup™ Lexington CSI4*-W, exhibitors in the $135,000 International Jumper Classic CSI4* were challenged to finish within the top 40 in order to earn a coveted slot in the show jumping grand finale of the week. Up against a sizable field of talented contenders and a challenging 15-effort track constructed by Ken Krome (USA), 13 pairs mastered the first course to gain eligibility into the jump-off, while four duos fell victim to a single time fault and a handful were knocked out of contention at the oxer-vertical in-and-out, the bogey fences of the evening.

Proving why he has previously held the title of best in the world based on the Longines Rankings, Farrington maneuvered 11-year-old Creedance, the horse he owns with R.C.G. Farm, to the first double-clean ride of the evening as third in the jump-off order-of-go, stopping the clock in 37.49 seconds to set the standard to beat for his peers that would follow. Georgina Bloomberg (USA), Peter Lutz (USA), Conor Swail (IRL), Beezie Madden (USA), and Sharn Wordley (NZL) all followed suit with subsequent double-clear trips, but none were quick-footed enough to overthrow the class leaders.

A familiar face in the winner’s circle, Farrington is a multi-time Olympian for the United States and has been successful on the world stage with mounts such as Voyeur, Uceko and Gazelle, in addition to Creedance, for a number of years. Farrington wore the world’s No. 1 armband from May 2017 until April 2018, only being overthrown from the top spot after a leg injury prevented him from competing. Since returning to the show ring, he has quickly returned to his winning ways, nabbing victories in Valkenswaard, Germany; Valence, France; Calgary, Canada; and Tryon, USA, among others.

Prior to Thursday’s feature event, the Alltech Arena welcomed 31 horses and athletes to vie for top honors in the $35,000 Palm Beach Masters Series International Open Jumpers Speed CSI4*. Operating under a faults-converted format, any downed rails added three penalties to the time to determine a final score for the round, meaning both speed and precision were imperative for a respectable tally. As one of the first to enter the ring, the ever-formidable Madden and Abigail Wexner’s Jiva set the pace with their quick trip in 56.51 seconds. Hot off their win in Thursday’s $35,000 Free x Rein International Jumper Welcome Speed CSI4*, Madden and Jiva looked to be the ones to beat as pair after pair failed to usurp them.

Nearing the end of the order, Katie Dinan (USA) and Tarioso Manciais, owned by Grant Road Partners, finally edged out the frontrunners, tripping the timers just a hair faster in 56.34 seconds to jump to the top spot, but their lead wouldn’t hold. As the reigning American Gold Cup winner of the $204,000 Longines FEI Jumping World Cup™ New York CSI4*-W with D’Arnita, Cawley’s reputation preceded her, and the veteran competitor did not disappoint. As one of the final five to take to the ring, Cawley and Louisburg Farm’s Picobello Choppin PC blazed around the Alltech Arena, carefully slicing across the track and leaving all of the rails up in a lightning fast final time of 54.20 seconds, more than two seconds ahead of the previous class leaders, to clinch the blue ribbon ahead of reserve finishers Dinan and Tarioso Manciais as well as Madden and Jiva.

The Alltech Arena also played host to the $10,000 Junior Jumpers and $10,000 Amateur-Owner Jumpers earlier in the day. In the junior contest, Isabella Bleu and her own Jahil led the way with a fault-free jump-off effort in 32.995 seconds to edge out the reserve finishers, Mimi Gochman and Gochman Sport Horse LLC’s Street Hassle BH, with their final time of 33.809 seconds. Not far off the pace, Paige Matthies and Barbara Smith’s Dirkie Z rounded out the top three with a clean jump-off ride in 35.023 seconds. Out of the field of amateur-owners, owner-rider Riley Newsome piloted Dakar VDL twice successfully, leaving all of the fences intact and breaking the beam in 39.783 seconds over the short course, just ahead of the time earned by the reserve champions, Addison Glerkink and Kadley Holdings LLC’s Erco Van T Roosakker, in 40.073 seconds. Haley Gassel and Quite Dark 2, owned by Westwind Equine Training Center, finished in the third position, riding to a clean and clear jump-off time of 40.791 seconds.