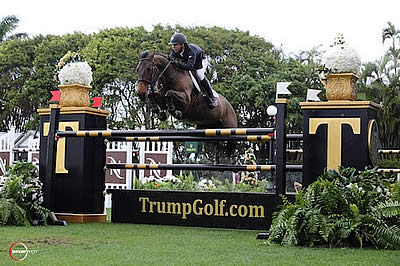 Palm Beach, FL – January 5, 2014 – Kent Farrington (USA) and Robin Parsky’s Blue Angel added another victory to their roster of recent wins with a top finish in Sunday’s $125,000 Trump Invitational Grand Prix, presented by Rolex. Held at The Mar-a-Lago Club in Palm Beach, FL, the second annual event brought together many of the best in equestrian show jumping for a day of great competition and charity fundraising, set on the lawn of Mr. Donald Trump’s scenic estate. Despite substantial rain, the grass footing that was newly replaced after last year’s event held up well throughout the day’s competition to give Farrington his second consecutive victory. He won the inaugural competition in 2013 aboard Amalaya Investments’ Dynamo.

International course designer Anthony D’Ambrosio, of Red Hook, NY, set the track for Sunday’s highlight competition with twenty-eight horse and rider combinations, eight of which cleared the course without fault to advance to the jump-off. Seven entries returned over the short course with three double clear efforts. Kent Farrington and Blue Angel, a 2002 Anglo European mare by Luidam x Ascendant, led the victory gallop with a time of 36.85 seconds.

Candice King (USA) and Bellissimo LLC’s Kismet 50 finished second with a clear jump-off round in 38.76 seconds, and Todd Minikus (USA) and Legacy Stables LLC’s Uraguay were third in 38.88 seconds. Lauren Hough (USA) and The Ohlala Group’s Ohlala had the fastest four-fault round in 38.30 seconds for fourth place.

Following an exciting class, Equestrian Sport Productions CEO Mark Bellissimo praised the event and its many contributors, including the addition of new turf footing installed by Mr. Trump. “I think this event was amazing,” Bellissimo acknowledged. “To see the riders take very significant horses into the ring and ride in this condition is a testament to the great investment that Donald had in this class. Congratulations to Kent – another great job and a gutsy ride. I also want to reach out to all of the sponsors and all of the phenomenal contributors to this event. I am very excited about this class, and I think that this will grow in stature each year.”

Donald Trump had another great year hosting the event and looks forward to 2015. “I just want to congratulate Kent and our great champions,” Trump smiled. “They are amazing athletes. As a novice, I think the weather made it more exciting. Last year we had the sun beaming down, and it was hot. I had no idea that these athletes could even perform in this kind of weather. I was very surprised by it, and it was amazing. I think it really made it quite exciting.”

After back to back wins, Farrington expressed his gratitude for another victory, as well as the improved conditions this year. “I think all of the riders want to applaud Donald and Mark for redoing the footing,” he stated. “I think that is a huge effort for them to undertake, and part of making this a really top-notch, high level event so that we can bring our best horses here and know that we can count on great footing even in conditions that aren’t ideal, like today. I think it is really exciting having Donald get involved in our sport. I think that raises not only the level of competition, but also the exposure here in Florida. Also thank you to Rolex for getting involved, I think that is huge for show jumping in North America.”

Commenting on his success with Blue Angel, Farrington noted, “That horse was already a winner before I started riding it. Lauren Hough had a lot of success with it, and it continues to be a great horse. It’s great to win two in a row (here). A big win is always exciting and for this event, to be part of it and to win it, is really special for me.”

Farrington went into the jump-off after some very fast rides and a clear round already posted by Todd Minikus and Uraguay, but he shaved almost two seconds off of their time for the winning round.

“These are fast riders that I’m against, so it was more to measure the competition and to see how fast they were going so that I could plan my ride accordingly,” he said of the jump-off. “Todd is one of the fastest riders in the world, so today I relied on the speed on my horse and I just tried to stay very smooth. That horse is a seasoned competitor. She knows her job and she is all business when she comes to the show.”

Candice King was pleased with her second place finish aboard Kismet 50, who put in a great effort in Sunday’s class as well. “Kismet 50 is quite special to me,” the rider stated. “I am usually one to go double clean and not so fast, but I was going last, so I wanted to really put it all out there as best I could. I knew I could go as quick as I safely could on this footing in the rain, so I tried to put it as smooth as I could, be quick and efficient, and see where it brought me.”

Commenting on the course, King added, “Anthony is seasoned; he builds all over the world and he did a fantastic job. This arena and this setting are fantastic, and the footing this year was great. There is no way that we could have competed like we could today at a lot of venues on grass. That is a testament to the new footing put in, and we are really appreciative as riders for our horses and their safety.”

Third place finisher, Todd Minikus, also had a great day. “I thought Uraguay jumped a fantastic first round and, going earlier in the jump-off, my plan was to put in a double clear and hope everyone else had a rain storm come in and give them a little bad luck,” Minikus joked. “I left the door open. I told the handlers of Uraguay when I came out, ‘That was a third place round,’ and it was. Nevertheless, we are very happy to be part of this event. I know everybody is extremely thrilled, and even though it was a little wet, it was a great day.”

Paige Bellissimo, chairwoman of the event along with Georgina Bloomberg and Ivanka Trump, summed it up nicely with her take on the day, stating, “Unfortunately, we couldn’t control the weather, but we tried our best to control all of the other elements, and I think everything else came out really well. The whole team put in so much work, and I think you could really see it. Everything came together except the weather, and all of the riders did an incredible job and really showed what great athletes they are to prevail through these conditions.”

A $5,000 Junior/Amateur Jumper Speed Exhibition class, sponsored by EnTrust Capital, was also featured on Sunday afternoon following the main event. The exhibition class gave junior and amateur riders a special opportunity to compete at this unique venue and saw an exciting win for Cloe Hymowitz and Rose Hill Farm’s Bon Vivant. The pair had the fastest of three clear rounds with a time of 53.42 seconds. Heather Hooker and her longtime partner Perle finished second with a time of 56.83 seconds. Kira Kerkorian placed third aboard Lisa Kerkorian’s Rashmo Z in 59.46 seconds.

Hymowitz explained that she had not ridden in a month before Sunday’s class and was very happy with her ride. “I didn’t expect much, but I have confidence in my horse and myself,” she remarked. “With the conditions, it is definitely more challenging. With the rain, you want to be more careful and cautious when you make turns, but I went out there and rode my hardest and did my best, so I’m very happy and excited.”

“It is an amazing opportunity,” she said of showing at The Mar-a-Lago Club. “This is probably the nicest horse show I have ever been to. I was really excited when I heard that I was invited to compete. It was nice to see all of the top grand prix riders compete first and be able to watch how they executed their course and learn from them. It is definitely an honor to come and ride here with all of these great riders.”

Heather Hooker has had her horse Perle for almost five years and had confidence in her ride on Sunday. “We have done horse shows all over the place together,” Hooker stated. “Any conditions, you name it, she’s game. I can always trust her. The conditions definitely made it a little more challenging, but it was a really nice course and the footing held up really well.”

Michael Stone, President of Equestrian Sport Productions, concluded the day by thanking EnTrust Capital for their support of the new class. “We wanted to add something special for the riders that don’t often get to jump in front of the limelight like this, and then we were very lucky that EnTrust really wanted to sponsor it,” Stone noted. “We are really delighted that they wanted to do it because the enthusiasm from the riders is fantastic.”

Sunday’s class also served as a kick-off to the season for the 2014 FTI Consulting Winter Equestrian Festival. The 12-week circuit begins this Wednesday, January 8, and runs through March 30, 2014. The Mar-a-Lago Club is the title sponsor of week one competition as well as the presenting sponsor of the $30,000 Mar-a-Lago Club Grand Prix, which will be held on Sunday, January 12, at the beautiful Palm Beach International Equestrian Center. Another highlight of the week is the $75,000 Nespresso Battle of the Sexes, which starts the “Saturday Night Lights” series on Saturday, January 11, with gates opening at 6 p.m. For more information, please visit www.equestriansport.com.