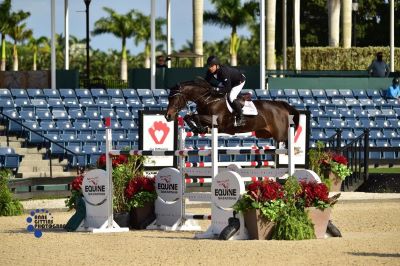 Course designer Anthony D’Ambrosio (USA) created a track of 15 efforts for the class, which was run under an altered power-and-speed format. The first nine fences constituted the first phase, and the final six jumps made up the second phase, with riders continuing to the latter portion of the course even if they had faults in the first set of obstacles. Adrienne Sternlicht (USA) and Cadans Z, owned by Starlight Farms 1 LLC, set the bar as seventh in the order with a speedy second phase time of 27.717 seconds and held on to that position until Kent Farrington (USA) and Austria 2 flew through the speed phase in 25.999 seconds. Less than a second behind the second-place finisher was Andrew Bourns (IRL) and his own Darquito, who landed in third with a clear time of 27.836 seconds.

“This will be my second WEF with Austria 2. I’ve been riding her for two years now,” remarked Farrington of the 2008 Holsteiner mare by Casall x Corrado I owned by Take the High Road, LLC. “She’s been an amazing little horse; she wins tons of classes. She has jumped some huge grand prix classes, she’s fast enough to win a speed class, and she’s brave enough to win the top ten final at Geneva. I think that really shows her versatility and her heart.”

Although Farrington will be showing all week, he shared that he does intend to have family time on Thanksgiving. “My mom and my sister are both here, so I always try to spend a little time with my family,” he said.” I’m thankful for the team here that has put protocols in place that allow us to compete under these circumstances. I feel very fortunate to be here.”

The day began with the $1,000 Bainbridge 1.40m CSI4*, which had 53 entries compete over the first-round course. Time proved to be a factor as 19 pairs were kept from the jump-off due to only one or two time faults, still leaving a whopping 24 fault-free teams eligible for the jump-off, 21 of which were double clear. In the end, Liubov Kochetova (RUS) emerged victorious riding her own Trevita (Graf Top x Stakkato) in a time of 32.72 seconds. The duo saved the best for last as the final partnership to ride over the abridged jump-off pattern, just edging out second-place finishers Tiffany Foster (CAN) and Artisan Farms LLC’s Vienna, who finished the course in 33.53 seconds. Anna Dryden (USA) rounded out the top three aboard Van Schijndel’s Double Bee, owned by Double Meadows Farm LLC, in 33.93 seconds.