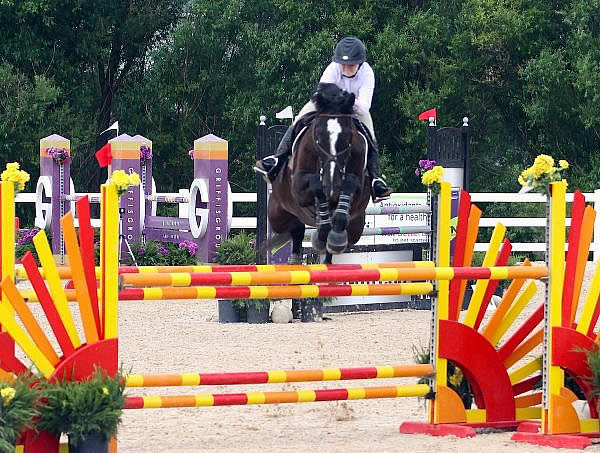 Kelsey Thatcher and Balougris SL Z slice the second fence in the jump-off round.

In the 1.30m Open Jumpers, seven of the 13 horse and rider combinations that took on international course designer Danny Foster’s course progressed to the jump-off round. Haylie Jayne aboard Dolce Vita, owned by Pony Lane Farm, were the first in the order. The pair progressed to the jump-off round, where they were clean with a time of 38.958 seconds.

Jayne held on to the lead until Andrew Kocher and Cricket, owned by Lance Williamson, had a clear first round, then delivered a fault-free jump-off round to trip the timer at 36.971. Last to go in the order, Kelsey Thatcher and Balougris SL Z, owned by Pony Lane Farm, put in a double clear effort. Their jump-off round took full advantage of the short course’s time-saving options and the pair bested Kocher with a time of 36.971. When Thatcher and Balougris SL Z, known as Balou in the barn, left the ring, Thatcher was beaming.

“My horse was excellent so I was happy,” said Thatcher. “Balou is one we bought from Denise Wilson, who is from Ocala and the Chicago area. We’re glad that he’s broke finally. When they imported him he was already 8 or 9 years old and had no experience. My sister was the first one that started to ride him and he went around like a giraffe. He had no understanding of leg to hands. He would buck anytime you put your leg on, like a total little punk. But he is super, super talented.”

“He is the definition of team work,” Thatcher continued. “Haylie showed him for several months and Charlie did him in Florida in a couple of the WEFs and Mark Ferris would do lots of flatwork on him. I’ve shown him and my sister has shown him. He’s been great for all of us and we all love him.”

“I hadn’t ridden him in a year,” she said. “I showed him here last year. And my sister rode him for a year and now I’m riding him again. He’s an incredible athlete. It’s amazing how far he’s come. I’m so proud of him. It’s fun to talk about him because he’s been a little secret.”

Thatcher found the course challenging. But with Balou, the jump-off was an opportunity to show off his talent.

“The jump-off was fun,” Thatcher said. “The horses have to pay attention to where their legs are. I am lucky that he is a nice horse. That number two fence of the jump-off was like a 30 degree angle. I think he just barely got his eye on it and jumped it in perfect form. It is not a shot I could have taken on any other horse.”

Thatcher will ride two entries in the $50,000 Parker Adventist Hospital Grand Prix tomorrow, Everything and Athena.

“I’m glad I rode in the class today because it gave me a good idea of what to expect for tomorrow with his course design,” she explained. “It’s funny, from one week to the next, it is the same ring, the same jumps, but the course designers ask completely different questions. There will be a phenomenal quality for a big money class.”

Foster’s tough course for the $2,500 1.40m Open Jumpers produced only one double clear round, from Kristen VanderVeen and Bull Run’s Holy Smokes, one of the latest additions to the impressive string of Bull Run Jumpers.

“We just got her recently and we’ve had a lot of fun trying a new program,” said VanderVeen. . “She only jumped the 1.20m when I got her just a few weeks ago. She’s really moved up quite quickly with us.”

The course today suited Holy Smokes. “The courses that are winding and turny work for her because I can break her up a little bit,” shared VanderVeen. “She likes to go, so that slowed her down a little bit.”

“They are very different than what we’ve been jumping, for sure,” she continued. “It was great for that horse. I like an open forward course. This course breaks up your ride a lot – it makes you jump off your eye with the bending and it challenges the riders in a very different way. It is good to change it up. If you’re not on the rhythm, it can get dicey real fast. If you can’t stay on the pace, the bending lines catch everybody a little bit backwards.”