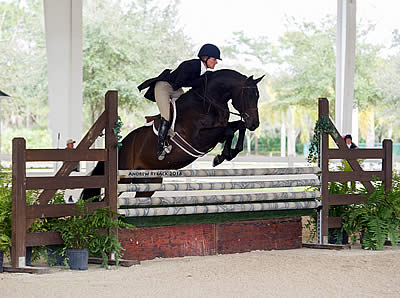 Wellington, Florida (February 6, 2016) – The fantastic covered arena of the Jim Brandon Equestrian Center set the stage for the first of this year’s Hunter Derby Days, presented by The Ridge at Wellington. As a branch of the 2016 Turf Tour, the Hunter Derby Days showcased some of the top hunters in the world being judged on their form and their horse’s movement over elegant natural obstacles.

2014 Hunter Derby Days Champion Kelly Farmer returned to defend her title, and for the second year in a row she clinched the international class. Farmer and her own It’s Me put in a fantastic performance in both rounds of the $15,000 USHJA International Hunter Derby to the standard for world class hunt seat at The Ridge. She was followed closely by Louise Serio aboard Jessica Burger’s Rock Harbor who rode to the Reserve Champion title. Round one of the International Derby was won by Farmer on Kent Farrington’s Like I Said, while Serio and Like I Said secured the win in the Handy. Farmer and It’s Me placed second in both rounds, ultimately earning them the overall win in the International Derby.

Molly Sewell proved her mettle that morning, taking both Champion and Reserve in the $5,000 Dietrich Equine Insurance USHJA National Derby. She topped the field with lovely rides Leslie C. Campbell’s E. L. Raymond, and took the Reserve Championship title with Mtm Caruso S, owned by Brynn Hanson. Generously sponsored by Dietrich Equine Insurance, the National Derby served as a way for riders to qualify and earn points for the National Hunter Derby Championship across the various divisions including Performance Working Hunter, Pre-Greens, Amateur Owner, and Junior Hunter. The Turf Tour’s trademark hospitality and relaxed atmosphere carried over to both the National and International Derbies, with complimentary lunch, an organized horse shuttle, and permanent stabling offered to all competitors.

Judges George Wallace, Diana Carney, Spencer Chatham, and Carol Hoffman were tasked with evaluating and awarding the best rides in each of the USHJA events, and Kevin Giblin’s course designs set the stage for a true test of the agility and elegance of performance hunters. Organized by Olympian Nona Garson, George D’Ambrosio, and Craig Bergman, The Turf Tour’s competitive, utopian show atmosphere is matched only by its hospitality. For only $75, riders can schedule pick up and drop off at the Turf Tour’s weekly venue, including both of the Hunter Derby Days competitions, as well as a trip back to their farm anywhere in Wellington after their rides. With the inclusion the pageantry and athletic prowess of performance hunters through the Hunter Derby Days, 2016’s Turf Tour is setting a new standard for national and international competition.

The Turf Tour continues Saturday, February 6th at Carben Farm (formerly Ashland Farm) with the headline Grand Prix on the turf field. The second of the Hunter Derby Days will take place on Friday, March 18 at Jim Brandon Equestrian Center. The evening class will take place under the lights, and will offer a unique atmosphere for riders and spectators to experience world class hunter competition.

The Ridge will also host a USEF Rated Equitation show each Tuesday during the winter show season, and its Palm Beach Series hunter and equitation show occurs one weekend each month at the farm. For more information, including a full prize list, visit www.theridgefarm.com. For up-to-date information, please follow The Ridge at Wellington on Facebook.