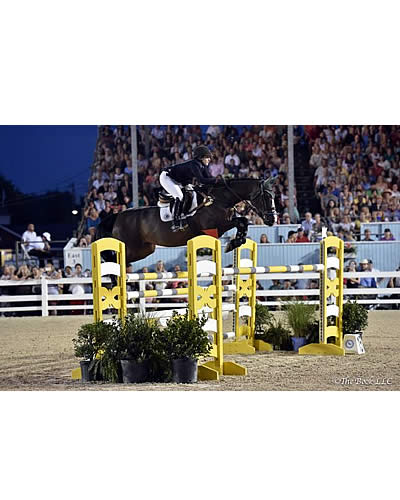 Beginners luck or youthful indiscretion can be used when a young person takes home a major victory, but none of those correctly describe Kelli Cruciotti. Hard working, determined – those are the best adjectives to describe the 17-year-old athlete who won her first grand prix with Chamonix H during Thursday night’s prestigious $100,000 Sapphire Grand Prix of Devon.

“I can’t believe it. This is actually my second grand prix with her,” expressed Cruciotti at the end of the night. “She’s unbelievable. She’s the best horse I could learn to do this on. It hasn’t sunk in at all.”

In front of a packed house, Cruciotti navigated a seven-horse jump-off to claim the first major win of her budding career and to be the youngest rider to ever win the historic event. Course designer Michel Vaillancourt narrowed down a field of 28 entries, which included Olympians such as McLain Ward, Peter Leone and Beat Mandli, to just seven riders for the tiebreaker. A triple combination caused problems for a number of competitors in the first round, but for two of the youngest riders in the class, as well as one of the youngest horses, it never caused an issue.

The first rider to return for the short course was hometown hero Callan Solem of Chester Springs, Pennsylvania with Horseshoe Trail Farm’s VDL Wizard. The pair set the pace to beat with a clear round in 41.534 seconds. Aaron Vale soon one-upped them with Equi-Sport LLC’s E.S. Finou 4 with a faultless round in 40.606 seconds.

Devin Ryan entered the Dixon Oval next with one of the youngest horses of the night: the 8-year-old Dutch Warmblood gelding Cooper. They took over the top spot when they made it around the course in 40.058 seconds. The duo did not top the leader board for long though when Cruciotti and Chamonix H galloped into the ring. With tight turns to each obstacle, the pair became the ones to beat with a blazing time of 38.678 seconds.

“Going in to the jump off Peter [Wylde] said go medium and nice,” noted Cruciotti. “Luckily, everything just kind of showed up off the turn. I turned back really tight to the double, and she really came through for me. I came out and Peter was like, ‘that was a nice medium!'”

Kaitlin Campbell’s effort to beat Cruciotti was thwarted when she tried to catch the time on Rocky W but had a rail in the combination for four faults in 39. 892 seconds. Another young rider, 18-year-old Michael Hughes, was up next with Christina Fried’s MacArthur. They proved that there is no shortage of young talent when they raced through the timers in 39.498 seconds to take over second place. Alison Robitaille was the last to compete with Mr. & Mrs. Bertram Firestone’s Cassinja, and while they took home the Richard E. McDevitt Style Award at the end of the night, a rail in the combination would have them earning sixth place.

When Cruciotti returned to the returned to the center of the Dixon Oval to accept the Celeste McNeal Harper Perpetual Trophy, it was with a mixture of joy and shock. The young rider, who graduated high school last week, is not new to the sport, having earned multiple top placings in the hunters and equitation, but she only competed in her first grand prix two weeks ago during the Kentucky Spring Classic, and she had no expectations of leading Thursday night’s victory gallop.

“I think my goal was just to have a nice round, just a nice maybe four fault round,” smiled Cruciotti. “I didn’t really have any expectations. When I made the jump-off, I didn’t have much to lose. It’s amazing to win at a show like this. It’s just unbelievable. I’m lucky to be here.”

Cruciotti and Chamonix H worked hard this winter developing their partnership and gaining experience during the Winter Equestrian Festival. They took home the top prize in the $25,000 Artisan Farms Under 25 Grand Prix during the second week of the circuit, represented the United States as part of the winning Junior Nations Cup Team, and closed out the circuit with a third place finish in the $50,000 Artisan Farms U25 Grand Prix Finale.

“I think [the U25 classes] are a nice medium step,” said Cruciotti. “It’s higher than the junior jumpers, but it’s not quite as big as the open classes. You get to really do a lot of different things there: the lights, the grass. I think that really helps in this kind of situation.”

Another product of the U25 and junior programs in the United States is second place finisher Michael Hughes, who became a professional just this year after aging out of the junior divisions.

“It’s amazing,” said Hughes. “The last time I had MacArthur here he was a bit spooky. So this time we got him a little bit quieter, and he was so much better. I did him under the lights in Florida. I have to watch; he gets a little bit of bit spooky with the shadows.”

It was not just young riders that were successful during the evening’s highlight event though. Devin Ryan’s 8-year-old mount Cooper proved what the Young Jumper Championships do for the development of a horse.

“He won the 7-year-old classes in here last year,” explained Ryan. “I’ve brought him here since he was a 5-year-old. The atmosphere, the ring and the crowd – it’s never bothered him. Any ring he’s stepped into he’s always been really brave and game and wanting to go. I just started moving him up the levels this year into the grand prix. The only reason I planned on doing him tonight and actually not my older horse is because I know his mentality for it and the crowd and everything. It doesn’t faze him. I didn’t feel I was over facing him.”

Earlier in the day, the Young Jumpers competed in the Dixon Oval beginning with the 5 Year Olds, where Taylor Flury and Catanisa Saflo Z took home the blue ribbon for the second day in a row. In the 6-Year-Old Young Jumpers, Jaime Auletto piloted Ecamorka win, and in the 7 & 8-Year-Old Laura Chapot had the fastest clear jump-off effort with BEC Hugo.

The young riders and young horses that highlighted the $100,000 Sapphire Grand Prix of Devon will have two more opportunities to compete this week on Friday and Saturday night. For more information about the Devon Horse Show and Country Fair and complete results, visit www.DevonHorseShow.org.