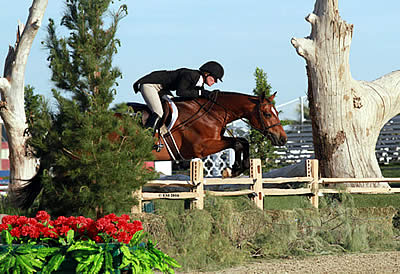 Thermal, CA (March 22, 2016): As the sun set over the mountain ridge at HITS Desert Horse Park in Thermal, California, an eager crowd gathered to witness thirty-nine riders and their elegant mounts compete for one of the most prestigious hunter victories, the $100,000 USHJA International Hunter Derby.

Kelley Farmer returned to HITS Thermal with several horses to compete in the Derby in Week VIII of the Desert Circuit, one of three $100,000 International Derby classes being offered by HITS this year.  After garnering all top three spots in the Derby at the HITS Ocala Masters just a few short weeks ago, the Keswick, Virginia equestrian once again took claim to first, second and third in Thermal.

Rian Beals of Saugerties, New York set a beautiful course in the HITS Grand Prix stadium with 13 all natural-type hunter jumps elegantly decorated.  An extra-long natural tree jump across the middle of the ring, which horses jumped beautifully, was an eye-catcher and spectator and rider favorite.  Larry Glefke, the trainer of all three winning mounts, said the course “was one of the best Derby courses we have seen” this year.

“When we came out for the Derby in Thermal in November, it was one of the nicest classes we’ve been to and the Ocala class was exceptional also,” said Glefke. “The footing is beautiful, the accommodations have been great, and we’re grateful to [HITS President and CEO] Tom Struzzieri for stepping up and doing these classes – it’s a wonderful thing for the industry.”

Farmer agreed saying she was “so proud of all of her horses; they all jumped great, and the course was lovely.”  She also commented that as a follow-up to the $100,000 USHJA Hunter Derby in November in Thermal, HITS “definitely repeated themselves.”

The top twelve returned for the second round of the two round derby.  First to return was Hugh Mutch of Redwood City, California riding Bunistar, owned by Naomi Rubin.  Mutch, a top West Coast Grand Prix and hunter rider, laid down a beautifully executed handy round, taking a short, flowing track and all high fence options for the top second round score of 299.  As one judge commented, “Bert gave riders and spectators a riding lesson tonight.”  Mutch topped all other eleven riders in the handy round bringing himself from twelfth place after round one to fifth in the final standings.

Nick Haness of San Clemente, California and Spot On, owned by West Coast Equine Partners, LLC, challenged the top contenders. Haness opted for three of the height options to capture a second round score of 290.  With a total score of 557.5 for both rounds, Haness took home fourth place for his efforts.

Farmer and Mindful followed Haness, opting for three height options and earning a second round overall score of 292, combined with a first round score of 268.5 for a total of 560.5, putting them in the temporary lead.

The last three rides belonged to Farmer, but which one of her mounts would be the victor was still in question. Farmer entered again with It’s Me, co-owned with Bibby Farmer-Hill and Susan Pinney. They earned a second round score of 258 and a first round score of 275 to total 533, ultimately earning seventh place.

Farmer followed her own round with Publicized, a new derby mount for the rider. They topped Farmer’s own score with Mindful to earn scores of 287 and 279, respectfully, for a total of 566, giving them the final second place prize.

Saving the best for last, Farmer stepped in the ring to compete aboard Baltimore. In true champion fashion, they stepped up to the plate to garner the gelding’s first ever Derby win. They earned the highest combined two round score of 578 for the night’s win.