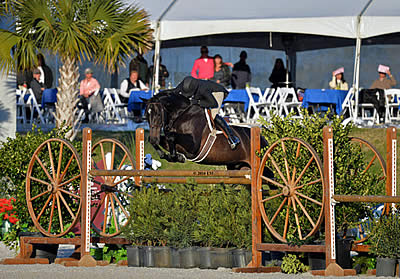 Ocala, FL (February 28, 2016): The second $100,000 USHJA International Hunter Derby of the HITS Hunter Derby Tour paid a visit to HITS Post Time Farm in Ocala, Florida on Saturday during Week VI of the Ocala Winter Circuit. As the sun set, and the lights of Ocala Horse Properties Stadium flickered to life, the crowd watched in anticipation to witness who could master the course with finesse and the highest caliber of precision.

“All of the horses were great through the course, and the course was beautiful too; [the event] was just all around quality in addition to having the opportunity to compete for this kind of money here,” said Farmer.

Farmer claimed first place with seasoned derby winner, Mindful, owned by Kensel, LLC, as well as second with Baltimore, owned by Jane Gaston, and third with It’s Me, co-owned with Bibby Hill and Sue Pinney.

“It’s just incredible, but I could not have done it without everyone you see out here, the owners and all who support us. It takes a village. I also owe it to all of these talented, four-legged animals – they’re amazing,” Farmer said, nearly speechless at the plethora of victories. “I was lucky enough to have plenty of shots [at the win].”

“The course was beautiful and very well done,” said “R” Judge for the United States Equestrian Federation of 25 years, Mike Rosser. “The fences were unique, and it was a different track than you normally see. The riders had not just one or two options, but three or four options – it was one of the better quality courses that I have seen.”

Farmer finished the first round with the highest score aboard Point Being, owned by David Glefke. Six of the 12 returning rounds were piloted by Farmer, but a talented list of contenders ready to rally for blue still filled the second-round Order.

After four trips, two including Farmer and her eventual seventh place mount Need I Say and eighth place Courville Paola, owned by Melissa Rudershausen, no score had come close to Farmer until Cassandra Kahle of Langley, British Columbia stepped in.

Kahle and Cornetto Royal, owned by Yvetta Rechler-Newman, meticulous in their pursuit of a win, opted for all four height options and received a combined total of 15 Handy Bonus Points. It was quite the comeback, but not enough to garner the lead. A first-round score of 172.5 combined with a second-round score of 196 totaled 368.5 for fourth place, just half of a point away from what would be Farmer’s third place score of 369.

Eighth in the order was Elizabeth Boyd of Camden, South Carolina and Brunello. The graceful chestnut Hanoverian and Boyd, a three-time winner of the USJHA International Derby Championships, opted for all four height options and received a combined total of 15 Handy Bonus Points from the two judging panels. They earned a second-round score of 188, which combined with their first-round score of 176, gave them a total of 364 for the eventual fifth place.

The last four trips of the $100,000 USHJA International Hunter Derby belonged to Farmer. The victory was hers to win, with the horse she would share the winner’s circle yet to be determined.

Farmer returned with Baltimore. Opting for all four height options, and earning a combined total of 14 Handy Bonus Points from the two judging panels, they received a total second-round score of 197.5. Combined with their first-round score of 177, that gave them a total of 374.5 for second place – not a bad turn-out for the Oldenburg’s first-ever derby.

“Baltimore is a first-time derby horse, and to be second with him is just wonderful. It’s an awesome result,” said Farmer.

Farmer followed her own round with It’s Me. The judging panels awarded a combined 14 Handy Bonus Points and a total second-round score of 192. Combined with their first-round score of 177, they came out just ahead of Cassandra Kahle with an overall total of 369 for third place.

Mindful and Farmer entered to put in the winning round, and the stunning black Hanoverian gelding silenced the crowd as they gracefully conquered the course, earning a total second-round score of 211. Combined with their first-round score 185, their overall score of 396 sky-rocketed above the rest to top the leaderboard.

“Mindful is a seasoned derby horse,” said Farmer. “He makes it easy, he knows what he is doing and is just a true winner.”